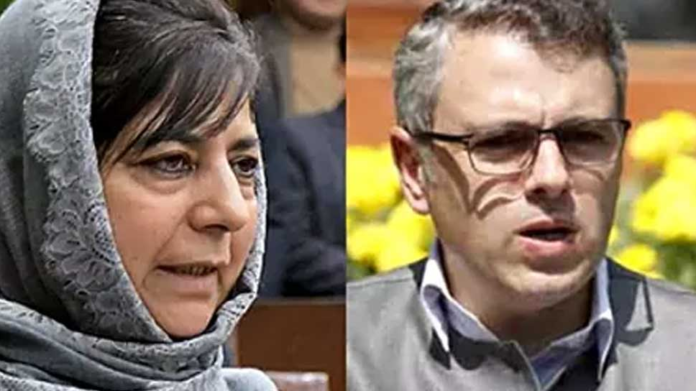 After Union Home Minister, Amit Shah, lashed out at People’s Alliance for Gupkar Declaration (PAGD), an amalgam of unionists fighting for the restoration of pre-August 2019 status of Jammu and Kashmir, for wanting “foreign forces to intervene in [J-k]”, the former chief ministers have reacted scathingly. Mehbooba Mufti, who also heads People’s Democratic Party, said that the BJP is using “‘Gupkar Gang’ euphemism to project us as anti-nationals” instead of focusing on issues such as “rising unemployment and inflation”.

Ms. Mufti took a dig at the home minister stating that “old habits die hard”. “Earlier BJPs narrative was that the tukde tukde gang threatened India’s sovereignty & they are now using ‘Gupkar Gang’ euphemism to project us as anti nationals,” she said. “Irony died a million deaths since its BJP itself that violates the constitution day in & day out.”

Earlier, Mr. Shah in a series of tweets attacked the Congress for joining hands with the alliance, “The Gupkar Gang is going global! They want foreign forces to intervene in Jammu and Kashmir. The Gupkar Gang also insults India’s Tricolour. Do Sonia Ji and Rahul Ji support such moves of the Gupkar Gang? They should make their stand crystal clear to the people of India.”

Omar Abdullah, vice president of the National Conference, said that “Only in J-K can leaders be detained and called anti-national for participating in elections and supporting the democratic process.” He added: “The truth is all those who oppose the ideology of the BJP are labelled ‘corrupt & anti-national’.”

On 4 August 2019, the unionists came together at Gupkar residence of Farooq Abdullah to secure the articles 370 and 35A. Next day, New Delhi had imposed a clampdown in Kashmir and revoked the decades-old limited autonomy from the parliament. All prominent leaders, including three former chief ministers, were detained. After their gradual release in 2020, they all came together under the banner of the PAGD.

“We are not a ‘gang’ Amit Shah ji, we are a legitimate political alliance having fought & continuing to fight elections, much to your disappointment,” Mr. Abdullah said. On the similar lines, Ms. Mufti said: “Fighting elections in an alliance is also anti-national now. BJP can stitch as many alliances in its hunger for power but somehow we are undermining national interest by putting up a united front.”

She further stated that the “BJPs stale tactic of dividing India by projecting themselves as saviours and political opponents as internal and imagined enemies is far too predictable now”.

“Love jihad, tukde tukde, and now [the] Gupkar Gang dominates the political discourse instead of like rising unemployment and inflation,” she said.