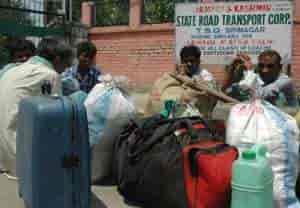 Two non-local labourers were killed on Tuesday night after suspected militants attacked them at their rented accommodation  in Hermain area of south Kashmir’s Shopian district.

A senior police official said that two non local labourers identified as Munish Ahmad and Sagar Ali were attacked by militants as they were asleep at their rented accommodation. Both of them belonged from Kanoji Uttar Pradesh.

They were shifted to district hospital Shopain, where both of them were declared brought dead, the officials added.

Soon after the attack whole area has been cordoned off to nab the attackers. (GNS)