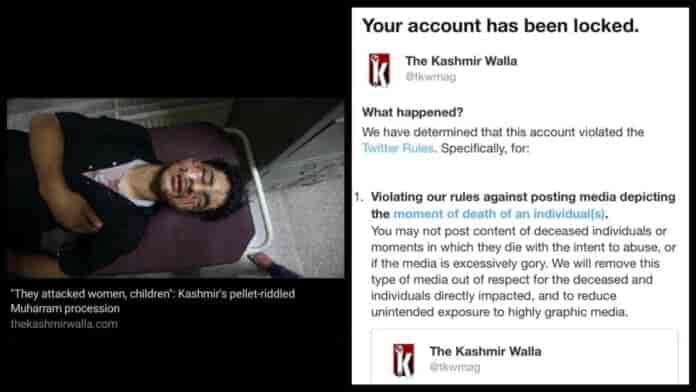 Srinagar: Social media giant Twitter has locked the official handle of The Kashmir Walla, after the news organisation on Thursday  tweeted a news story from August 2020 about police excesses on Muharram procession in Srinagar.

Even after 24 hours of appealing to Twitter Support, the weekly newspaper has received no response so far from the Jack Patrick Dorsey owned company.

Right after locking of the handle, Kashmir Walla editor, Fahad Shah had called on the concerned to check the matter, “The official handle of @tkwmag has been locked because of this news feature we tweeted. @TwitterIndia @TwitterSupport Will this be checked?,” Shah had tweeted.

In 2019, the micro-blogging site was accused of suppressing freedom of expression in Kashmir after a study by the media watchdog, Committee to Protect Journalists (CPJ), revealed that nearly one million tweets have been removed since 2017.

Previous article“Regret the damage caused by the attack”: Pakistan to rebuild destroyed Hindu temple
Next articleRTI: a statute inviting attacks on activists in Kashmir