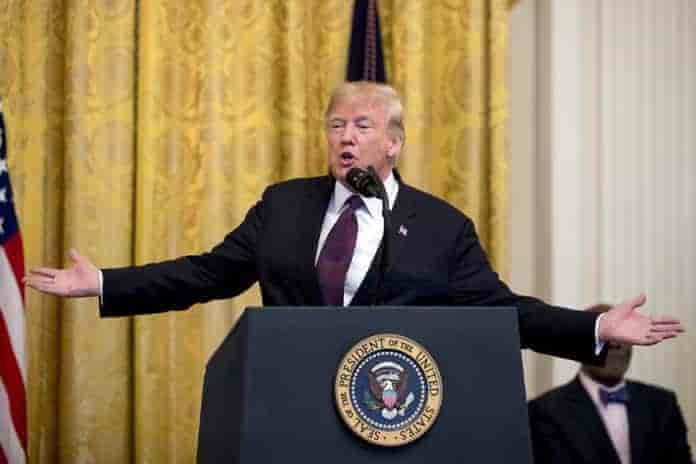 US President Don­ald Trump’s offer to mediate betw­een India and Pakistan over the Kas­hmir dispute might have prompted New Delhi to revoke article -370 in Jammu and Kashmir , says a report prepared for the US Congress, Dawn reported.

The Congressional Research Service (CRS) noted that on July 22, 2019, while taking questions from the press alongside Pakistani Prime Minister Imran Khan in the White House, President Trump claimed that Prime Minister Modi had earlier in the month asked him to play a mediator’s role in the Kashmir dispute.

Yet, “President Trump’s seemingly warm reception of Pakistan’s leader, his desire that Pakistan help the United States ‘extricate itself’ from Afghanistan, and recent US support for an International Monetary Fund (IMF) bailout of Pakistan combined to elicit disquiet among Indian analysts,” the report added.

Indian leaders “saw Washington again conceptually linking India and Pakistan, ‘wooing’ the latter in ways that harm the former’s interests,” CRS noted, adding that President Trump’s Kashmir mediation claims were especially jarring for Indian observers, “some of whom began questioning the wisdom of Mr Modi’s confidence” in the United States as a partner.

“The episode may have contributed to India’s August moves” to annex Kashmir, CRS added.

Although President Trump never withdrew his mediation offer, the strong Indian reaction forced the US State Department to post a clarification on the social media, stating that Washington still saw Kashmir as that “a bilateral issue for both parties to discuss” and the Trump Administration “stands ready to assist.”

In its second report on Kashmir in less than six months, CRS also noted that many in India disagree with the Modi’s government’s “blanket characterisations of the Kashmir conflict as an externally fomented terrorist.”

They argue that such characterisations “obscure the legitimate grievances of the indigenous Muslim-majority populace,” the report added.

CRS noted that critics of the Modi government believed it was working on a “Hindu nationalist agenda” to change the status of the occupied valley.

The critics argued that “its policy agenda entails bringing the patriotism of Indian Muslims into question and portraying Pakistan as a relentless threat that manipulates willing Kash­miri separatists, and so is responsible for violence in Kashmir,” the report added.

CRS, an independent research wing of Congress, prepares periodic reports for US lawmakers so that they can take informed decisions on major international issues.

The CRS report pointed out that supporters of New Delhi’s Hindu nationalist agenda oppose a negotiated settlement of the Kashmir dispute.

In their view, “talking to Pakistan cannot resolve the situation, nor can negotiations with Kashmiri separatist groups and parties, which are seen to represent Pakistan’s interests rather than those of the Kashmiri people,” the report added.

Quoting independent observers, CRS reported that blanket characterisations of the Kashmir conflict as an externally fomented terrorist effort endorses a “harsh counterinsurgency strategy that … has only further alienated successive generations in the Valley.”

Those who reject the Modi’s government’s narrative, argue that “Kash­mir’s turmoil is, at its roots, a clash between the Indian government and the Kashmiri people, leading some to decry New Delhi’s claims that Pakistan perpetuates the conflict,” the report added.

CRS reported that pro-independence political parties on both sides of the Line of Control were given little room to operate, and because of this many Kashmiris had become deeply alienated.

CRS noted that “India’s self-image as a regional leader in no need of assistance” prevents it from accepting third-party mediation on Kashmir.