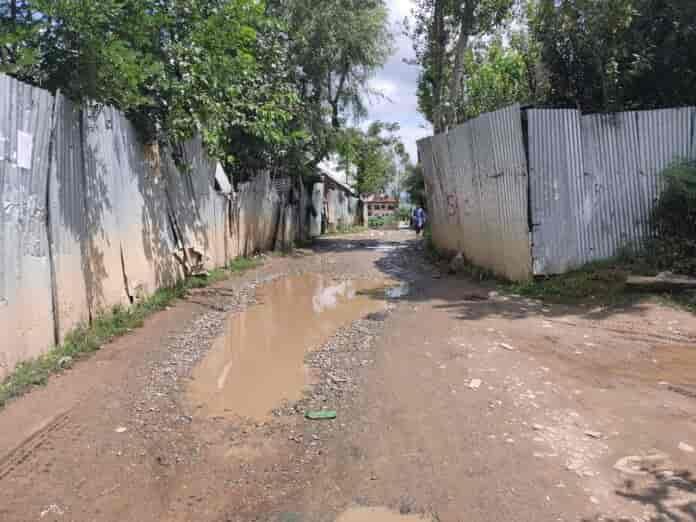 Civil society members of villages of Trehgam, Poshpora, and Kunan on Thursday held a protest demonstration outside the District Commissioners’ office in Kupwara demanding repair and macadamization of the road that connects areas with district headquarters.

The protestors raised slogans against the administration for failing to repair the road that is full of potholes, ditches, and craters.

Talking to the news agency—Kashmir News Observer (KNO), the aggrieved protesters said that, “from the last few years our road reflects a look of a riverbank.”

“To reach Kupwara from my village would hardly take 10 minutes but now it takes more than an hour and the cabbies are reluctant to drive on the road,” said Advocate Fayaz Mir, former Sarpanch of Poshpora.

In the past, the villagers had approached the civil administration demanding macadamization of the road but despite assurances, no work was done, alleged Fayaz.

“This was the road that were built decades ago connecting a bunch of villages with Kupwara town and now the second most important road in Kupwara constituency after the national highway and yet it is a victim of official neglect,” said Aabid Quadri, a political activist and Panchayat representative in Poshpora.

He said that a few weeks back his cousin got injured after his motorcycle fell in a crater while making way for a truck near Kunan.

Quadri also pointed to how politics has played its part in sidelining the up-gradation of the road. “Some three kilometers of the road from Kupwara to Hanjpora is well covered with tar coal but from there onwards, everything is in shambles and it is because some politicians ensure the road is not macadamized ahead.”

Interestingly the villages of Kunan and Poshpora were declared model villages by the government of Mehbooba Mufti in 2017 and thereafter the road was widened all along but the up-gradation work came to a standstill.

“We want to know what has stopped the administration from upgrading the road for years. The government makes tall claims of progress but there is nothing on the ground. We urge the administration to repair and macadamize the road on priority,” Mohammad Abdullah Mir, Block Development Chairman (BDC) Trehgam said while speaking with the media at the protest.

Deputy Commissioner Kupwara Imam Din told KNO that he met the protesters and heard their demands.

“The road was to be upgraded under Central Road Fund (CRF) and as it was to be executed the funding was closed in the entire Jammu and Kashmir,” Imam Din said, adding the R&B department has now submitted the project in languishing category.

“I have asked the executive engineer to fill the ditches and potholes under the annual repair and maintenance fund so that the difficulties faced by the people are averted for a time being,” he said—(KNO)