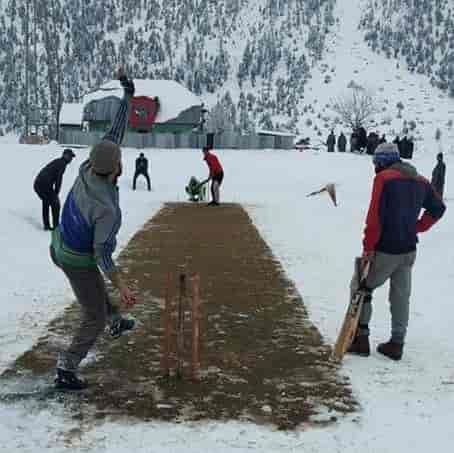 Srinagar: To attract the attention of higher authorities and the outside world for promoting winter sports, youth in the remote valley of Gurez in northern Bandipora district organized a snow cricket tournament on a frozen snowfield in Markoot village.

The tournament was organized by Sports Cricket Club Markoot and total of 10 teams participated in the tournament, reported wire-service KNO.

As per locals, the remote valley has a great potential for winter sports as it remains covered under heavy snow which the tourism and sports authorities have failed to recognize.

The locals said that when different winter sports can be organized in Gulmarg, why similar games cannot be held in Gurez during winter months as the area has great potential.

“Gurez valley has been ignored on all fronts by successive regimes even as the area has a vast scope for tourism activities during summers as well as winters. The area remains covered under heavy snow for more than four months during winters which provide a great opportunity to organize winter games here also,” Muhammad Iqbal Lone, a local cricket player told.

He said that the serene and mesmerizing beauty of this small valley, mostly during winters when it’s covered with heavy snow, attracts the attention of many. The locals said that the successive governments have failed to recognize the potential the Gurez valley has for winter sports.

“The area lacks sports infrastructure for organizing winter games as it has been ignored, but to attract the attention of higher authorities and the outside world youth of Gurez have been organizing snow cricket tournaments over the past few years,” he said.

The residents said that the area lags far behind other parts of the state as it remains cut off from rest of the valley and outside world for about six months due to the closure of Bandipora-Gurez road during winter months. Locals said that youth have now turned to snow cricket at the foothills of famous Habba Khatoon peak to promote winter sports in Gurez and also beat the winter chill.

Muhammad Yousuf Khan, a local resident, said that during winter months people of Gurez remain confined to their homes as they don’t have anything to do. “Had the authorities promoted this place as a winter destination and organized winter games, the area would get economically uplifted and it would also help the residents to overcome weather vagaries. The area has the potential for winter games like snow skiing, ice hockey and various other games,” he said.

With heavy snowfall across Kashmir during Chillai Kalan, Gurez had received more than 6 feet snow and with nothing to do in the harsh winter, snow cricket has become a point of attraction for most of the residents here. (KNO)