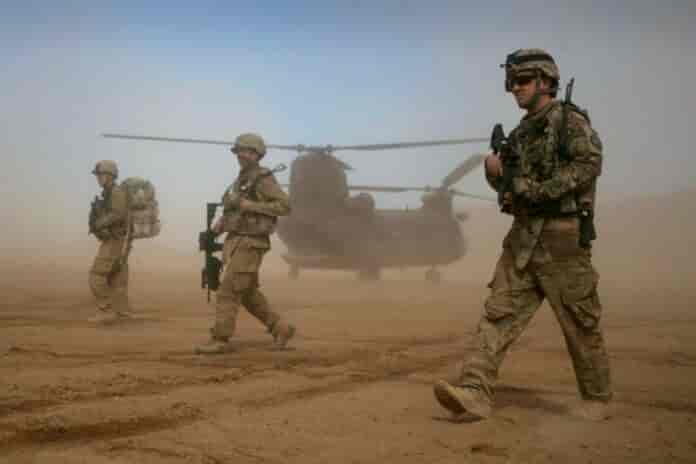 US President Joe Biden has announced that all American troops would be withdrawn from Afghanistan by 11 September this year.

The decision brings an end to the country’s longest war, spanning across two decades, Press Trust of India reported.

“US troops, as well as forces deployed by our NATO (North Atlantic Treaty Organization) Allies and operational partners, will be out of Afghanistan before we mark the 20th anniversary of that heinous attack on 11 Septembe (2001), said Biden during a televised address to the nation from the White House on Wednesday.

Responding to questions Biden said the troop-pullout was not a tough decision.

“No, it wasn’t. To me, it was absolutely clear. Absolutely clear. We went for two reasons: to get rid of (Al Qaeeda chief Osama) Bin Laden and to end the safe haven. From the very beginning, you may recall, I never thought we were there to somehow unify Afghanistan. It’s never been done,” Biden told reporters.

In his address to the nation, Biden reiterated that his administration would remain alert to the threat of terrorism.

“We’ll reorganise our counterterrorism capabilities and the substantial assets in the region to prevent re-emergence of terrorists, of the threat to our homeland from over the horizon. We’ll hold the Taliban accountable for its commitment not to allow any terrorists to threaten the United States or its allies from Afghan soil. The Afghan government has made that commitment to us as well. And we’ll focus our full attention on the threat we face today, he said.

Biden said his team is refining national strategy to monitor and disrupt significant terrorist threats not only in Afghanistan, but anywhere they may arise — Africa, Europe, the Middle East, and elsewhere.

The United States will begin our final withdrawal — begin it on 1 May of this year. We will not conduct a hasty rush to the exit. We’ll do it responsibly, deliberately, and safely. And we will do it in full coordination with our allies and partners, who now have more forces in Afghanistan than we do, he said.

“The Taliban should know that if they attack us as we draw down, we will defend ourselves and our partners with all the tools at our disposal, he said.

Before making the announcement, Biden had spoken with former US presidents Barack Obama and George Bush.

“President Biden has made the right decision in completing the withdrawal of US forces from Afghanistan, Obama said in a statement later.

After nearly two decades of putting our troops in harm’s way, it is time to recognise that we have accomplished all that we can militarily, and that it’s time to bring our remaining troops home, he said.

Since the US-led invasion that ousted the Taliban after the September 11, 2001 attacks, America has spent more than USD 1 trillion in fighting and rebuilding in Afghanistan.

About 2,400 US soldiers have been killed, along with tens of thousands of Afghan troops, Taliban insurgents and Afghan civilians.

Previous articleWoman allegedly dies of cardiac arrest during nocturnal ‘police raid’ in Srinagar
Next article‘Disruptors would step in’: CDS Rawat concerned about US pullout from Afghanistan