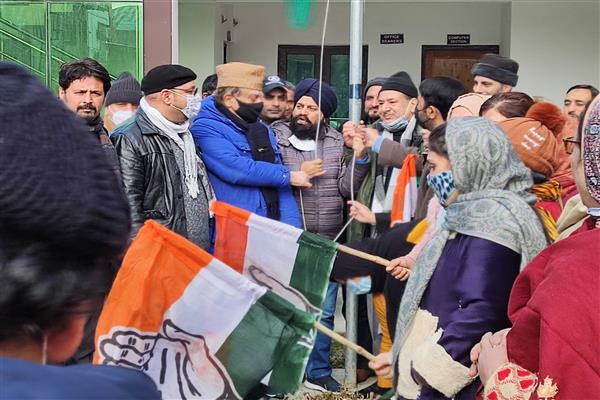 Srinagar: The Jammu and Kashmir Pradesh Congress Committee (JKPCC) Tuesday observed Party’s 137th Foundation Day at Srinagar Party Office while terming the Party as an instrument of service to the people.

On 137th Congress Foundation Day, Senior Party Leaders, District Presidents and prominent workers of Kashmir province in a function held at Srinagar Party Office recalled the sacrifices & selfless services of the Congress Party to the Nation.

Speaking on the occasion Bashir Ahmad Magrey said Congress was founded on this day by 72 delegates, which reminds us of our dedication and commitment to the cause of strengthening the organization and serve the people, as that, the party has history of 137 years services to the Nation, credited of empowering people of every shade living in the country, besides making India as a prosperous and developing Nation.

On this occasion, Magrey said those opposing the Congress to hide their failures must know that it is the Congress party alone which has united the country and defeated the forces inimical to the Indian State, the Party feels committed to fight against all those forces harming the very foundation of Secular India.

Congress party re-presents the idea of secular India and it will continue to serve and unite people of all colours and religions, Magrey added.

Speaking on the occasion, JKPCC General Secretary Surinder Singh Channi described the Congress as a hope for the people, while having full faith in the programme and pro people policies of the Party. Channi urged the party cadres to do their best to strengthen the Congress Party at booth level.

On this occasion, Congress leaders and workers led by Bashir Ahmad Magrey hoisted the Party flag in the premises of PCC Office and exchanged greetings. (KNS)