Surprised at laughable claims of respect for press freedom from some officials: KWJA 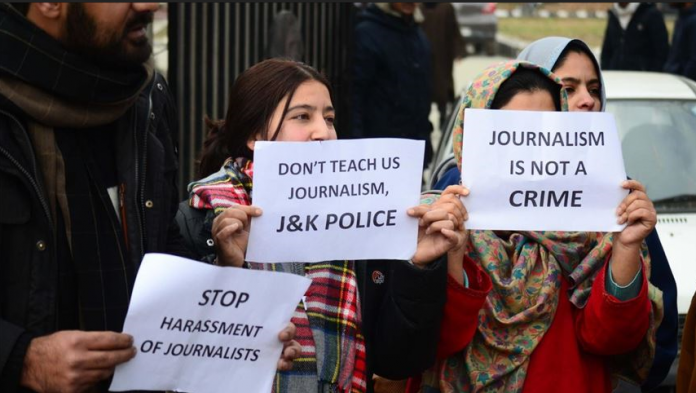 Srinagar: The Kashmir Working Journalists Association (KWJA) has noted with dismay that despite pleas for an enabling environment for media, J&K Police has not withdrawn its latest cases against three journalists in Kashmir.

In a statement issued here the journalist body said, “We strongly condemn and protest the continued harassment of journalists in Kashmir at the hands of police and reiterate our demand that cases against journalists Gowhar Geelani, Masrat Zehra and Peerzada Ashiq should be withdrawn immediately,”

Further adding that KWJA was surprised at the “laughable claims of respect for press freedom from some officials in the state where a systemic repression of media houses and arm twisting of journalists has by now been entrenched as a governance policy to curtail the larger freedoms and rights of people,”

The statement issued further said that it was ironical that such claims were made in the same statement that disdainfully referred to a well worked on news report as “fake news” and bragged about making some journalists apologize inside a police station.

“The ugly pattern of summoning journalists to police stations, seeking explanations about their professional work and intimidating them with the first information reports (FIRs) is going on since August last year.
Like previous instances, KWJA believes cases against journalists Peerzada Ashiq, Masrat Zahra and Gowhar Geelani are aimed only at muzzling the press in Kashmir and that all charges against them are motivated.
For a vibrant press to flourish in a society, authorities have to move beyond hollow claims of respect for press freedom and work towards a conducive environment where a journalist can report the facts on ground and /or express his opinion on social media without fear of a police summon.” It stated.