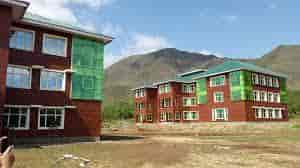 Engineering students of Islamic University of Science and Technology (IUST) Awantipora are in distress as they said many of them cannot appear in semester examinations due to the pending fee and attendance below 75 percent.

“We will pay it [fees],” said an engineering student. “Students just need some time as we all are going through tough times since the past two years.”

He said the authorities at the university are telling them to pay the bus and hostel fee too which is around “9000 rupees and 6000 rupees respectively”. “Students hardly boarded buses or stayed at hostels,” the student said. “Why are we then supposed to pay that also?”

The students are saying that the bus and hostel fee should be waived off. “It increases the financial burden on the students. The students must be given time to deposit the semester fee.”

Another student of the engineering department said that “students are already facing mental trauma because of the ongoing situation and the university is adding to their misery”.

He said that many students did not attend the online classes to match the 75 percent attendance. “Some of them were positive and others had positive family members,” he said. “Nobody was in a mental space to attend the classes every day.”

The student said that their department has been forcing students “by very harsh and underprivileged means of online examination”. “They have been asked that only one question for 30 marks will be given which they have to do within 30 minutes,” he said.

He added that they have tried to contact the authorities and resolve the issue but “haven’t received any proper response so far”.

Anisa Jan, Dean student welfare of the university, said “ we have told them that we will give them some time to deposit”.

“We will issue a notice in some time regarding the same,” said Jan. “They have to deposit tuition fees only.”

She added: “We have assured them that the university understands the condition they are passing through and will take steps accordingly.”

However, the students said that the authorities are just ensuring but “not doing anything on the ground”. “Our exams are on our heads. When is the right time to take action then,” said a student.