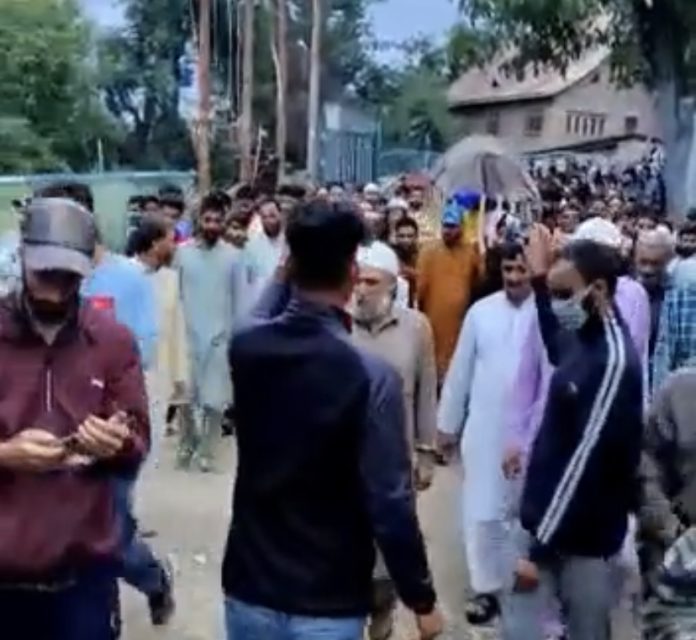 In a span of 102 days, militants targeted the Kashmiri Pandit community again by killing a KP farmer and leaving his brother injured.

The death, however, displayed a communal harmony yet again as large number of Muslims took part in the last rites of slain KP member in Chotigam, Shopian district of southern Kashmir.

Kashmiri Pandits living in Chotigam, Shopian who didn’t leave Kashmir during 90s were attacked again resulting in on spot death of Sunil Kumar Bhat while as injuries to Petamber Nath Bhat. On Tuesday, as news of attack on Kashmir pandits spread, Muslims of locality rushed to the spot to take Pintoo to hospital and to console other pandits living there.

Three Pandits families comprising of around 16 family members are living in this village who didn’t migrate during the 1990s.

Subzar Ahmad, neighbour of Sunil and Pintoo said that all arrangements for the last rites of Sunil were made by Muslims who were also consoling Pandits living here.

Eyewitnesses told a local news agency, Kashmir News Observer (KNO), that Muslims made all arrangements of last rites and were seen raising slogans in favour of unity besides end to innocent killings.

“We have always lived here peacefully and we share our grief and celebrations since decades,” said a pandit living in Chotigam.

He said the back to back attacks in last four months have definitely raised the level of fear among them yet again bring back the gory memories of 90’s.

He said that guards were deployed here again in April but how can they save them every time as “we can’t restrict our movement to our residence only as we have to go to our land, orchards or to do any work to earn livelihood otherwise we will die of starvation”.

Pandits living there said that they were guarded by government forces till 2016, however, it was taken off during Burhan agitation and since then we were offered security several times but we declined as we weren’t feeling any threat till April this year.

“But how guards deployed there can provide us security as we have to go to market, farm land and students have to go to school every day,” they said. (KNO)