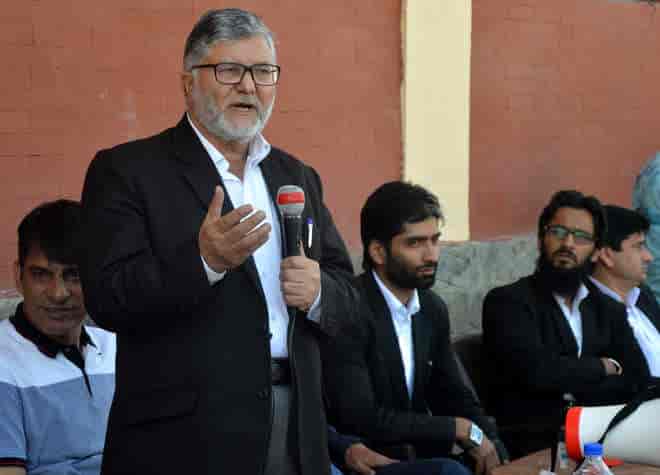 The Supreme Court has asked the administration of  Jammu and Kashmir to explain the basis for detaining high court’s bar leader Mian Abdul Qayoom who has challenged his detention under Public Safety Act (PSA) since August 7 last year.

According to the news agency Press Trust of India (PTI) the top court asked it to take into consideration various aspects including Qayoom’s age, expiry of detention period and the COVID-19 pandemic.

A bench of Justices Sanjay Kishan Kaul and Indu Malhotra posted the matter for 23 July after Solicitor General Tushar Mehta, appearing for J-K, said that he needs 10 days time to consider various aspects.

We want to know on what basis you (J-K administration) would like to detain him in Delhi’s Tihar Jail. Moreover, his detention as per order has already expired,” the bench said.

At the outset,Mr. Mehta said he had not received the copy of the plea and sought time to reply to it.

Senior advocate Dushyant Dave, appearing for Mr.Qayoom, said the detention order was for a limited period, for around one year.

The bench said that was the reason it has issued notice on the plea during the last date of hearing.

Dave replied that he understands why the Solicitor General was uncomfortable and complained that the present matter was not listed despite specific directions of the court.

Justice Kaul told Mehta that firstly his detention period has expired and secondly his ideology remains the same.

Mr. Dave pointed out that Mr. Qayoom is 73 years old and should not be kept in Tihar jail.

In the current scenario of COVID-19 would you like to keep this petition pending, the bench told Mr. Mehta, who said that Mr. Qayoom’s ideology remained the same.

The bench said it understands all these issues but sometimes there are compulsions which need to be complied with.

It told Mr. Mehta that he should respond by next date considering Qayoom’s age, expiry of his detention order and the COVID-19 times.

On June 26, the top court had issued notice to the J-K administration and sought its reply on Mr. Qayoom’s plea challenging his detention order.

Mr. Qayoom has also sought a direction to shift him from Tihar jail here to central jail in Srinagar on medical ground.

He has challenged the May 28 order of the Jammu and Kashmir High Court rejecting his plea against his prolonged illegal detention under the PSA in jails outside the UT.

He said he is a Senior Advocate with more than 40 years’ standing at the Bar and has served as President of the J&K High Court Bar Association for many terms, including from 2014 till the present day.

Mr. Qayoom said he was detained on the intervening night of August 4th and 5th, 2019, under the provisions of Jammu and Kashmir Code of Criminal Procedure and thereafter, an order of detention under the PSA was passed against him on August 7, 2019.

He said that on August 8 he was taken to Central Jail, Agra, Uttar Pradesh, without any prior notice of intimation, where he was kept in solitary confinement.

He said the high court’s May 28 order is ex facie unsustainable in law as it is premised on “stale, irrelevant, remote, vague, imprecise and deficient” grounds of detention.

The impugned judgment and order concluded that most of the grounds in the detention order are somewhat clumsy which implies that the High Court too found them wanting. Placing reliance on the doctrine of severability as enunciated by this Court in Gautam Jain versus Union of India…the High Court then proceeds to uphold the detention order solely on one ground, his appeal said.

These FIRs are stale, irrelevant and have no proximate, pertinent or live link to the present, and are thus superfluous and extraneous to the satisfaction required in law qua the tendency or propensity to act in a manner prejudicial to public order. Pertinently, even in the said decade old 4 FIRs, the Petitioner was neither arrested, nor any charge sheet ever filed by the police against the Petitioner, he added in his plea.

Mr. Qayoom said he had already been detained in 2010 on the basis of the said FIRs under the PSA, and the said detention was subsequently revoked.

Thus, the same FIRs cannot be used to pass another order of detention under the PSA, as held by this Hon’ble Court , his plea said.

Mr. Qayoom said he is suffering from serious health ailments and is at a high-risk vulnerability for COVID-19 due to his co-morbid conditions.

The Petitioner has numerous serious medical conditions for which he has been receiving treatment for the last 25 years under the care and supervision of his doctors in Srinagar, Kashmir. The Petitioner is also dependent on his family for ensuring the regular and daily intake of medicines and regular injections, he added.

As an interim prayer, he sought his transfer to Central Jail, Srinagar, during the pendency of the present petition, ensuring that all necessary medical precautions are taken qua COVID-19.

Previous articlePaK man trying to infiltrate held by locals on LoC in Poonch, handed over to police
Next articleAreshva Mir brings laurels to Kashmir, secures seat in US college