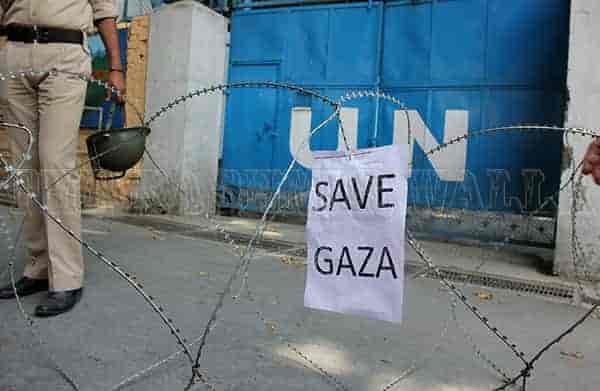 Israel’s Prime Minister Benjamin Netanyahu is all set to embark on delivering a major election promise: usurping the autonomy of the West Bank and annexing its territories.

Mr. Netanyahu, starting his record fifth term at the head of an improbable coalition with his arch-rival and former army chief, Benny Gantz, said last month that the Jewish state has a “historic opportunity” to annex occupied Palestinian land in the West Bank and that he intends to take it.

Despite criticism from the international community, risking Israel’s ties with the Arab world, and even Jewish settlers questioning the logic of the annexation plans, Mr. Netanyahu appears committed to annexing the West Bank, likely because he knows there will be little repercussions.

Israel’s indifference to token criticism from the international community is understandable. In recent years, several countries have gotten away with unilaterally usurping autonomies without major repercussions.

The only exception being Russia, an arch rival of the United States which was punished by the world bodies for annexing Crimea in 2014, nearly all countries have been left off the hook for violating international law.

The Israeli annexation of Palestinian land is in line with a series of similar measures around the world where domineering nationalistic governments have brought regions hitherto enjoying varying degrees of autonomy under the central yoke.

Last year August, when India under the Hindu nationalist government of Narendra Modi abolished the autonomy of Muslim majority J-K, the abrogation of the region’s limited autonomy was seen as an annexation aimed at a wider cultural homogenization promoted by Hindu supremacists.

However, seen as a possible counter-balance to a rising China, much of the Western world came short of criticizing India for revocation of Kashmir’s autonomy, let alone pressuring it. An emboldened Modi, later that year, passed the controversial Citizenship Amendment Act that threatens to make 20 million Indian Muslims stateless.

Months later, India’s neighbor China passed a new sweeping security law that will put a death knell to Hong Kong’s “one country, two systems” framework under which the city state was governed for decades.

The legislation is considered as a violation of the Sino-British Joint Declaration in which China had agreed to give Hong Kong some political and social autonomy through the “one country, two systems” policy for 50 years. That period was supposed to end in 2047 but caring little for its commitments, Beijing usurped Hong Kong’s limited autonomy even as its residents protested for greater democratic rights all through 2019.

Despite criticism, Beijing did not deter from moving ahead with its agenda on Hong Kong. In the following weeks after the security bill was passed, over 500 protestors were arrested in Hong Kong who were part of demonstrations against the bill.

With these two recent examples in his mind, it is unlikely that Mr. Netanyahu will feel obliged to abide by international law or norms.

Partly, the nature of American presidency under Donald Trump also explains this urge among countries to follow their illiberal desires without worrying for an American backlash. In the post-war world, all major global institutions like the United Nation’s Human Rights Council drew their authority from the support received from the U.S.

But with Mr. Trump’s zero sum approach and little concern for human rights, other countries perceive his tenure in the White House as an opportune time to follow their illiberal instincts without the fear of global sanctions.

“Trump by coddling Putin in spite of sanctions for Crimea and Ukraine, by shrugging off Modi’s ending of Kashmir’s autonomy, and endorsing and inciting Israel’s annexation of illegal settlements in the occupied west Bank, is encouraging the spread of irredentism virus; including Turkey in northern Syria and, of course, China in Hong Kong and Taiwan”, David Gardner, international affairs editor at Financial Times told The Kashmir Walla.

Interestingly, the idea to annex territories of the West Bank was also first mooted by Mr. Trump in his “Vision for Peace” plan to end the Israel-Palestine issue.

Even though Palestine, Kashmir and Hong Kong are separated by thousands of miles, they have one thing in common: British colonization. Till this day, these regions continue to share the grubby legacy of imperialism.

In the case of Palestine, British was in its possession up until the Second World War after which it withdrew from its responsibility to amicably resolve the question of Israel throwing the region into anarchy leading to the 1948 Palestine War.

Later, during the 1967 Arab-Israel War, Israel captured the area that had been the part of the British mandate of Palestine taking the West Bank from Jordan and the Gaza strip from Egypt. Ever since, Israel has set up illegal settlements all over the region often at the cost of local Palestinians.

In Kashmir, these protections were enshrined in the Indian constitution under Article 370 which limited New Delhi’s role in the affairs of administration in the region to broadly three matters of foreign affairs, communication, and defence. In Hong Kong, the “one country, two systems” framework ensured limited mainland interference in Hong Kong’s pluralistic landscape.

These frameworks were based on assumptions that India and China would abide by the guarantees to safeguard the distinct identities of regions that have now joined them. However, both regions and the West Bank are struggling to preserve their identities against domineering strongmen who have assumed power in India, Israel and China.

While the repercussions of Britain’s irresponsible withdrawal from its erstwhile colonies becomes more clear, new forms of coloniality are being practiced in these places, says Dibyesh Anand, a professor of international relations and head of the School of Social Sciences at University of Westminster. “What explains these forms is the nature of governance where the ‘security’ of nation-state is prioritized over rights and freedoms of the people”.

It is not only that autonomous regions are being brought closer to the mainland physically, the transgressions are as much cultural. In India, the Prime Minister Narendra Modi led central government is seemingly intent on altering the demographics of Kashmir by giving domicile rights to foreigners. Parallels to this can also be seen in Hong Kong, where the Beijing government is gradually replacing the local Cantonese language with Mandarin.

Events in the West Bank can thus be seen as the high point of these expansionist projects led by states which are increasingly becoming confident in their roles and status. That it comes at a time when the influence of the United States is shrinking only bolsters such moorings.