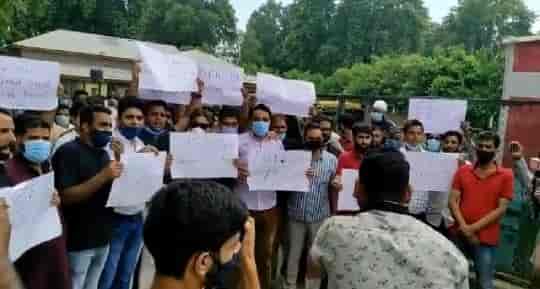 Authorities today disallowed the Peoples Democratic Party (PDP) from holding a meeting of its youth wing at Bijbehara in south Kashmir’s Anantnag district, the move criticised by its chief Mehbooba Mufti.

Following the move, the PDP youth wing held a demonstration while raising slogans against the administration for not allowing the meeting.

Taking a dig at authorities, Mehbooba said the Government of India (GoI) was not allowing any meaningful political engagement in the Valley. She also asked the Jammu and Kashmir Police why it had “roughed up” the party’s youth.

In a series of tweets, the former chief minister wrote, “PDP youth is not being allowed to conduct a meeting in Bijbehara today. The gates leading to Mufti sahab’s grave have been locked & blocked with barbed wires. Can @JmuKmrPolice explain why were these young men roughed up?”

Asserting that daily killings of militants have become a “source of celebration” for the GoI which she said was pushing Kashmiris to the wall by not allowing political activities.

“Daily encounters where militants are killed have become a a source of celebration for GOI. But PDP doesn’t believe in violence or dignity in death. We want to fight peacefully & politically. By discouraging political activities GOI is pushing Kashmiris to the wall,” she said in another tweet

She further said the GoI was branding all Kashmiris as “perpetrators of violence”.

“Preventing PDP youth from holding a meeting in South Kashmir reinforces GoIs strategy of not allowing any meaningful political engagement.Esp one that involves Kashmiri youngsters.GOI wants to justify their iron fist approach by branding all Kashmiris as perpetrators of violence,” the PDP chief tweeted.

Previous article‘Intellectuals have a duty to expose lies of state’: Supreme Court judge
Next article2 die in Japan after shots from suspended Moderna vaccines