PC holds massive convention in Rafiabad, hits out at NC 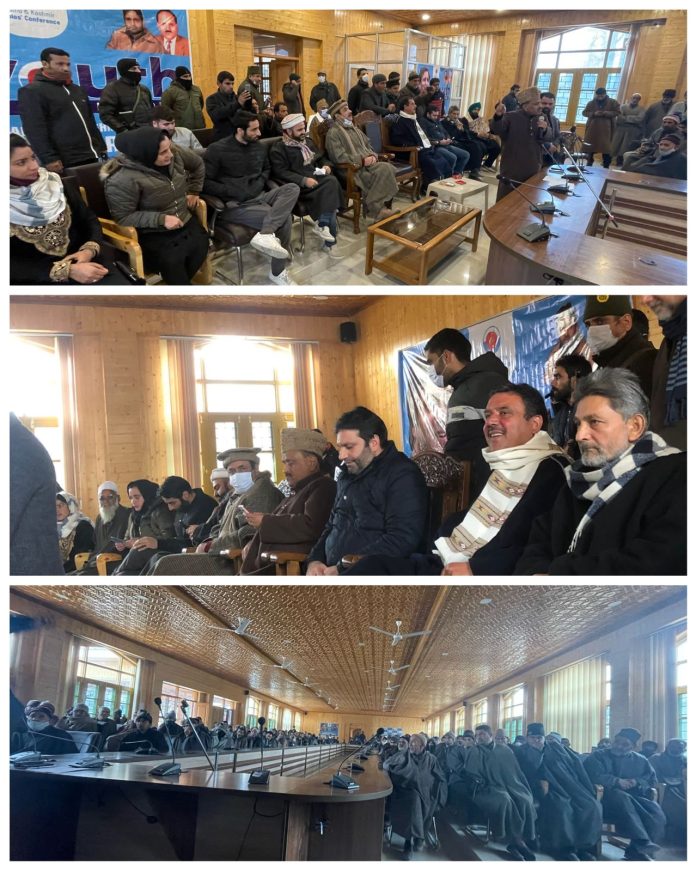 Adding that while addressing the gathering senior vice president and former minister Abdul Gani Vakil said that the NC has yet again shown its real face of duplicity and deceit. While on the one hand they are befooling the people by projecting themselves as the saviours, on the other they make a U-Turn on the issue of delimitation in  a span of just six months.

“How can a party which changes its stance with every changing season be trusted to fight for the interests of the people of J-K. It is obvious that the NC is bailing the BJP led Central Government out not just nationally but internationally as well by giving legitimacy to delimitation exercise. Their history is a testament to the fact that they are willing to go to any extent and compromise the interests of the people of Kashmir for the sake of power. It is time that the people of Kashmir, especially the youth to lead this movement of change”, he said.

Speaking on the ocassion Basharat Bukhari according to the communique said that J-K politics needs new ideas and energy. Lone is the only leader who can take us out of this impasse and restore the rights of people.

“The need of the hour is that the people of Kashmir stand with PC and its President Sajad Lone and help him realise his grand vision for the progress of the state and protecting the rights and dignity of its people”, he added.

PC senior leader Adv Bashir Ahmed Dar while addressing the gathering said that the delimitation proposal is an attempt to disempower and disenfranchise the Kashmiris and that the PC completely rejects it.

“They want to push Kashmir back to the disempowerment levels which existed at the time of Maharaja. It is an exercise aimed to shift power. Democracy gave power to the majority. Now this government wants to shift power from the majority to the minority, which is totally against the federal structure of the country”, he added.

Speaking on the ocassion YPC President Sheikh Imran said that
it is a matter of great satisfaction that a growing number of people, especially the youth, are showing great faith and trust in our party and its policies. He said that active and meaningful participation of the youth is imperative to address the challenges that have an impact on them and their future.

PC is committed to carve out space for youth leaders. We want to groom the youngsters to play a pivotal role and contribute to the politics and welfare of J-K. We are keen to promote tge youth to take the mantle of responsibility to shape a brighter future for the coming generations”, he added.