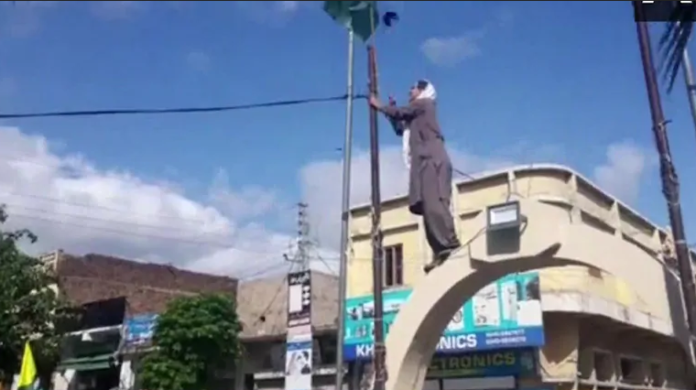 Two persons were arrested in Pakistan-administered-Kashmir (PaK) for taking down the Pakistani flag in Dhodial area in the region on Friday evening, 21 August, reported BBC.

The arrests happened after the flag was taken down from Maqbool Butt Shaheed Square, which was set up in Dhodial to pay homage to the sacrifices of Maqbool Butt, the founder of Jammu and Kashmir Liberation Front (JKLF).

BBC quoted Deputy Commissioner Mirpur, Tahir Mumtaz, claiming that Maqbool Butt Square is the property of Baldia Dhodial and the Pakistani flag was hoisted here for the 14 August celebrations, the country’s independence day.

After the flag was hoisted on 14 August, one of the arrested accused, Raja Tanveer Ahmed, initially went on a hunger strike and then took off the Pakistani flag. Public sentiment against him was high, said Mr. Mumtaz. He added that “people were protesting against the removal of the flag. Grief and anger were being expressed. Which has been acted upon in accordance with the law.”

However, the president of JKLF, Mirpur District, Saad Ansari Advocate said when Mr. Ahmed and “our colleagues contacted the administration, they said that after the August 14 celebrations, the non-state flag of Kashmir would be taken down and the flags of Jammu and Kashmir Liberation Front would be hoisted again.”

“When the August 14 celebrations ended, we demanded that the administration fulfill its promise,” he said. But when that did not happen, and Mr. Ahmed first went on a 72-hour hunger strike. He then approached the court and when his demand was not met from anywhere, he himself lowered the Pakistani flag, reported the British broadcast channel.

Though Mr. Mumtaz has completely rejected Mr. Saad Ansari’s claim. “We did not have any talks with him,” he said. We have never promised anyone to raise or lower a flag again.