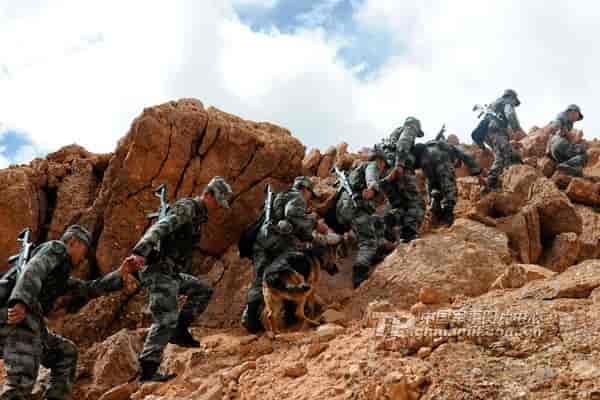 More than 5,000 Chinese soldiers of the People’s Liberation Army (PLA) have intruded into five points in Ladakh – four along the Galwan River, and one near the Pangong Lake, Business Standard has reported.

According to report the movement has been happening since  the third week of April.

This is for the first time since the Kargil intrusions of 1999, Indian territory is in the hands of foreign soldiers.

While patrol intrusions from both sides are routine in areas where the Line of Actual Control (LAC) – the de facto border between India and China – is disputed, the LAC in the Galwan Valley corresponds to China’s official claim line.

“That means that, in sending thousands of PLA troops three-to-four kilometres into the Galwan Valley, China has violated its own claim line and occupied territory that Beijing itself has traditionally acknowledged to be Indian,” notes the report.

Quoting sources the newspaper further reported, “This is not shaping up like a routing patrol confrontation, or even a temporary occupation of disputed territory of the kind that took place in Depsang in 2013, or in Chumar in 2014. This time the PLA soldiers are digging defences, preparing bunkers, moving in heavy vehicles and have reportedly even moved artillery guns to the rear (albeit in their own territory) to support the intruders,”

Adding that the Chinese have pitched close to a hundred tents at four points on the Galwan River between Patrolling Point 14 (PP 14) and another location called Gogra.

The report says that Indian troops in the area were taken by surprise when a large Chinese force crossed the LAC into the Galwan area in late April. Since then, Indian forces have not challenged or confronted the PLA.

Sources say the PLA is expanding its presence. There are fresh reports that the PLA has already initiated another infiltration into another sector in Southern Ladakh.

The Pangong Lake intrusion has been especially bloody for the Indian soldiers there. Sources say 72 Indian soldiers were injured in the confrontation and some of them needed to be flown to hospitals in Leh, Chandi Mandir and Delhi.

The PLA intrusions into Ladakh do not appear to be a localized operation, since they are spread across the area of responsibility of different PLA brigades and division. That suggests centralized coordination from at least the PLA’s theatre command.

At the local military level, which falls under the ambit of the Leh Corps Commander, there is little contact with the Chinese. It is learnt that the PLA has stopped responding to Indian requests for flag meetings under the mutual protocol termed the “Border Management Posture” (BMP). “It is a stand-off in which there is presently no communication,” says a senior military officer.

On the Chinese intrusion, the newspaper reports that Beijing is punishing New Delhi for publishing a revised map of the former state of Jammu & Kashmir in November, which showed Aksai Chin – which both countries claim, but China occupies – as a part of India.

Another viewpoint holds that the traditionally peaceful Galwan River has now become a hotspot because it is where the LAC is closest to the new road India has built along the Shyok River to Daulet Beg Oldi (DBO) — the most remote and vulnerable area along the LAC in Ladakh.

Along the 800 kilometre LAC in Ladakh, there have traditionally been just five trouble spots, where the two sides dispute the LAC. These are Chumar, Demchok, Pangong and two places near DBO. The PLA’s ingress into the Galwan River valley opens up a new and worrying chapter.