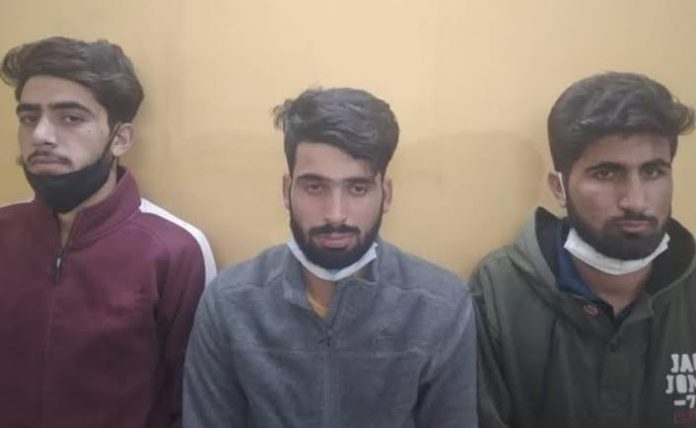 A week after three Kashmiri students, who were jailed under ‘sedition and cyber terrorism’ in Agra, in Uttar Pradesh, were granted bail, the trio is yet to come out of the jail after no local resident agreed to sign the surety bond, their lawyer told The Kashmir Walla.

Three students, all in their 20s, were arrested on 28 October 2021 after a complaint against them for “rejoicing” the victory of Pakistan over India in the T20 World Cup. They were granted bail by the High Court of Allahabad on Wednesday. In the bail, the court said: “the unity of India is not made of bamboo reeds which will bend to the passing winds of empty slogans. The foundations of our nation are more enduring.”

Showkat Ahmad Ganai, 21, an engineering student in his final semester, was detained along with two of his college friends, Arshad Yousaf and Inayat Altaf Sheikh, for allegedly putting up a “celebratory WhatsApp status” and “shouting pro-Pakistan slogans” after the cricket match. They were studying at Raj Balwant Singh College.

Madhuvan Dutt, students’ counsel, said that to facilitate the immediate release of the trio either the families would have been in a position to submit cash surety or the surety bond is to be signed by some local resident of the state of Uttar Pradesh.

He added: “the problem [is that] the family members of the trio are very poor. They are not in a position to file the cash surety.”

“We will submit a surety bond [hence] their release will take some time as the bonds are to be verified from Kashmir because no local resident of Uttar Pradesh is ready to sign the surety bond on their behalf,” Dutt said.

The trio was booked under criminal case number 675  of 2021 at the Police Station Jagdishpura, of District Agra under  Indian Penal Code’s Sections  153-A (promoting enmity between different groups),  505(1)(B) (statements conducing to public mischief), 124A (sedition), and section 66F (punishment for cyber terrorism) of  Information Technology Act.

Earlier the Agra District Bar Association had passed a resolution for not providing any legal assistance to the accused. The applicants were also assaulted in the District Court at Agra.

The bail order signed on 30 March 2022, seen by The Kashmir Walla, mentions that the trio be released on bail on furnishing a personal bond and two sureties each in the like amount to the satisfaction of the court concerned subject to following  conditions.

(i) The applicants  will  not  tamper with the evidence during  the trial.

(ii) The applicants  will  not  influence  any witness.

(iii)  The applicants will appear before the trial court on the date fixed, unless personal presence is exempted.

(iv) The applicants shall not directly or indirectly make inducement, threat or promise to any person acquainted  with the facts of the case so as to dissuade them from disclosing such facts to the Court to any police officer or tamper with the evidence.

It further states that in case of breach of any of the above conditions, the prosecution  shall  be  at  liberty  to  move the bail cancellation  application  before this  Court.