No image can describe the plight of Kashmiris with such grim precision: Shahid Afridi 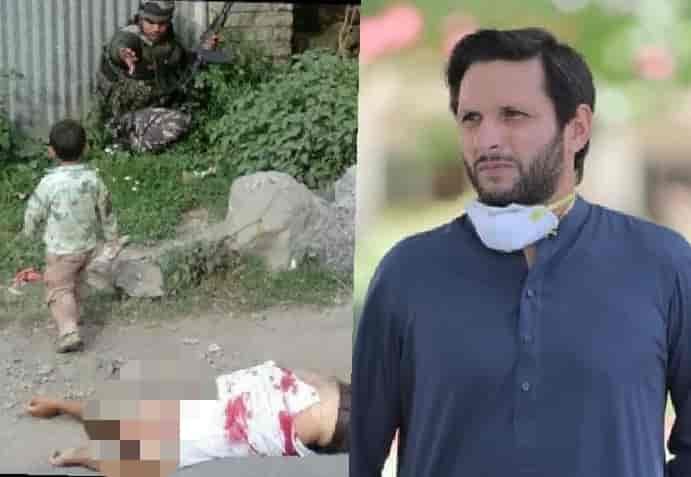 Former Pakistan cricketer Shahid Afridi on Wednesday while commenting on the viral photograph of a three-year-old child who lost his grandfather after militants attacked a Central Reserve Police Force checkpoint in Sopore has said that, “no image can describe the plight of Kashmiris with such grim precision,”

The former skipper became one more name in the list of people commenting on the photographs of the child. The pictures of the killed civilian lying on the ground and his grandson standing nearby prompted intense outrage on social media. Emotional and angry reactions from ordinary Kashmiris as well as politicians across both at home and outside.

Pictures of the killed civilian and his three-year-old grandson went viral on social media and evoked a sense of outrage over the incident.

Afridi who often raises his voice on the happenings in Kashmir while taking to his Twitter handle commented on the pictures too, “A child caught up between his grandfather’s bullet-riddled body and the gun-weilding soldiers. No image can describe the plight of Kashmiris with such grim precision,” the maverick cricketer tweeted.

Earlier, the family of a civilian killed in north Kashmir’s Sopore today morning, when militants attacked a deployment of Central Reserve Police Force (CRPF) troopers, alleged that he was killed by the government forces personnel and not militants.

However, while the police and politicians have blamed the militants for the killing, videos of family members claiming that the elderly man was killed by CRPF personnel have also gone viral on social media.

Senior Superintendent of Police, Sopore, Javaid Iqbal denied the allegations leveled by the family. “These reports of CRPF personnel dragging him from the vehicle and shooting him outside are absolutely incorrect,” Mr. Iqbal told The Kashmir Walla.