Around 24 percent of the population of Jammu and Kashmir owns a personal car, according to the statistics released by the union government.

According to the data released in the National Family Health Survey-5 (2019-2021), 23.7 percent of people in J-K own a car. Goa tops the list where 45.2 percent of the population has cars followed by Kerala where 24.2 percent people owned cars. 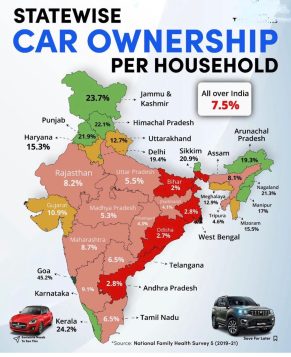 J-K, including Ladakh, ranks number one in north India followed by Himachal Pradesh where 22.1 percent owns a car. Similarly, in Punjab 21.9 percent owns private vehicles, while in Delhi and Haryana 19.4 and 15.3 percent population own personal cars.

According to the officials, the private owned vehicles in J-K have doubled in the last seven years. The data shows that private vehicles have increased from 12 lakh in 2015 to 24 lakh in 2022.

Sharing the data on his micro-blogging site Twitter, Chairman Mahindra Group Anand Mahindra said, “What are your conclusions when you see this map? I’m curious…(sic),”.

However, many in Kashmir complain that the introduction of private vehicles have severely affected the public transport in the erstwhile state.

“In the past 8 years, the public transport in Kashmir has completely disappeared. After 7 pm people in Srinagar can’t think of finding any public vehicles on roads. Situation is worse in towns n villages. Efforts to revive public transport have failed becoz of Govt’s disinterest (sic),” Samaan Lateef, a senior journalist tweeted.

Sajad Ahmad, who lives in Chadoora Budgam, said that he has to leave around 5 pm from Srinagar to catch a cab to reach home.

“I work in Srinagar, and it is very difficult for me to commute, especially in the evening time as you hardly find public transport plying on the road,” he said. “Everybody seems to have their own private vehicles nowadays.”

The average population in India that owns a car has risen up to 7.5 percent compared to 6 percent in 2018.