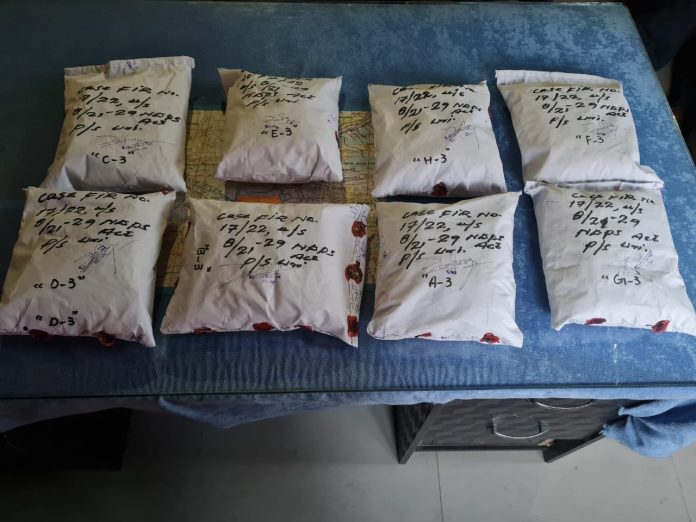 Srinagar: Police on Saturday claimed to have busted a Narco- militancy module by arresting two people along with contraband worth rupees 18 crore in North Kashmir’s Baramulla district.

In a statement to GNS, the police said that today on 5th Feb police party of Police Station Uri and Police Post Kamalkote headed by SHO Police station Uri were patrolling the area from Dachi towards Basgran.

During the patrolling two vehicles Celero-X bearing registration No. JK09C-1584 and Alto bearing registration No. JK05G-0247 were found on a link road towards Dachi in a suspicious condition. Police patrolling party moved towards the vehicles, but the drivers of both the vehicles saw the Police patrolling party and tried to flee away from the spot however due to the timely action of Police party, both the persons were apprehended tactfully.

According to Police spokesman, both the vehicles mentioned above were searched accordingly.

In total 08 packets of contraband weighing approximately about 09 Kgs was recovered.

“The cost of the contraband in black market is above rupees 18 Crores.”

During their personal search mobile phones, one cheque to the tune of rupees (₹ 5,00,000/-) five lacs and one Adhaar Card was recovered from the possession of Mohd Sabir Barwal, they said.

Seven cheques amounting to ₹ 9,79,500/- two blank cheques, 01 cheque book containing 22 leaves, one Adhaar card, one cell phone, pan card, e-sharam card, 02 ATM cards, 01 Kisan Card,01 Debit Card and other documents were recovered from the possession of Parvaiz Ahmad Tantary. In this regard case FIR No.17/2022 U/S 8/21-29 NDPS Act has been registered and investigation taken up, reads the statement.(GNS)