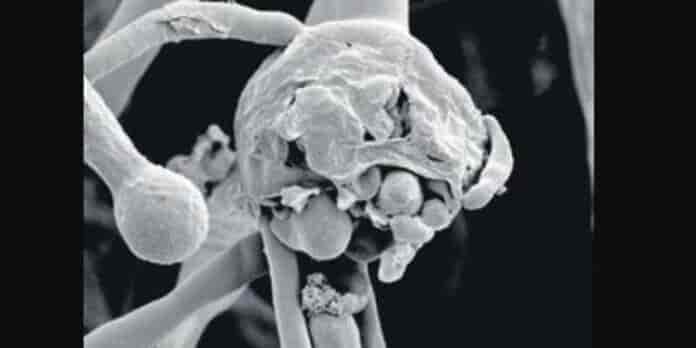 For 39-year-old Adil Ahmad, a WhatsApp forward he received on Friday has been a cause of concern and anxiety. The Srinagar man received photos of a man whose rotten eye was allegedly lying on the ventilator.

The man in the picture was a forty-year-old patient, who had recently recovered from COVID-19 but died due to Mucormycosis – commonly known as Black Fungus – at the Government Medical College Jammu.

It was, however, the fourth death due to the Black Fungus since the pandemic began in March 2020. Earlier this week, The Kashmir Walla reported that the cases of Black Fungus were detected in Kashmir valley last year but were not reported by the administration.

At least three patients infected with it have died and the survivors lost their eyesight. The deadly disease with a  mortality rate of over 60 percent has become a cause of concern for people. “It was scary, as if Covid-19 was not enough,” said Ahmad.

The disease is particularly scary for him because he only recently recovered from the contagion, “I survived Covid but the thought of getting Black fungus is eating me from inside,” he said.

India so far has reported a total of 8,848 cases of Black Fungus infections so far, union minister Sadananda Gowda said. The government has allocated over 23,000 vials of drugs used for the treatment of fungal infection to the states with a high number of cases.

Andhra Pradesh, Telangana, Gujarat, Haryana, Karnataka, Madhya Pradesh, Rajasthan, and Maharashtra are among the states that have reported several cases of black fungus infections. Maharashtra tops the list among affected states with 2,000 cases.

That the fungal infection has also now been detected in Jammu is something that has worried Ahmad and many others in the Valley. “It is scary, I am not able to concentrate on work, the black face of that dead man continues to haunt me,” he said.

While, for Ahmad it was a picture of a man infected with the disease that has taken away his sleep, for Mohammad Mugais a news item by the United Kingdom based Telegraph newspaper has been a cause of concern.

Telegraph while reporting on Black Fungus from Maharashtra reported that doctors were removing the jaws and eyes of patients to help them survive. In Maharashtra, at least 90 people who recovered from Covid-19 have died.

According to The Telegraph, there are currently 850 people hospitalised with mucormycosis in Maharashtra, although the authorities have warned they will have to treat 5,000 patients over the next few months.

The surge is being blamed on the rampant, long-term prescription of steroids to treat Covid-19 infections by India’s overwhelmed doctors. Only 41 cases had been detected among Covid-19 patients worldwide until March. “We have seen more cases of black fungus in the past week than we normally treat in two years,” tweeted Dr Arvinder Singh Soin, a leading Indian doctor in Delhi.

“I have not been able to sleep properly since I read about it,” Mugais said. His concern stems from the fact that he has earlier suffered from Bell’s Palsy and was yet to recover from the trauma. “I keep researching for ways to avoid Black Fungus, because Bell’s Palsy was a nightmare.”

Reacting to the concerns of Kashmiris,  leading pulmonologist and Head of Chest Diseases Department at Chest Diseases Hospital, Naveed Nazir said there is no case of Mucormycosis or Black Fungus in Kashmir.

His statement came hours after a 40-year-old patient from Poonch — who had recuperated of Covid-19 — died of the deadly fungal infection at GMC Jammu thus becoming the first casualty due to it in J-K. “There is no case of Mucormycosis in Kashmir Valley,” he said adding that “there was no need to panic”.

Doctors Association of Kashmir also issued a statement and warned against irrational use of steroids in Covid-19 patients “Indiscriminate use of steroids can trigger deadly black fungal infection, called mucormycosis which has reached to epidemic proportions in several states of the country,” said DAK Presiden Nisar ul Hassan.

Hassan said that steroids are life-saving drugs in severe Covid patients who have respiratory distress or need oxygen or ventilation. “We are seeing steroids being prescribed to patients with mild Covid disease,” he said. “People are using steroids on their own when they do not need them.”

While it remains to be seen how deadly Black Fungus Kashmir prove to be in Kashmir, in other states in the country the disease has already killed hundreds. India has reported over 8,800 cases of black fungus and more than 200 people have died due to this deadly disease, and it is causing anxiety among Kashmiris like Mugais and Ahmed.

Previous articleCOVID19: 12-yr-old girl among 19 die overnight in J-K
Next articleMissing youth among 4 arrested in Kulgam

‘Being a living corpse’: Pakistani wives of former militants feel ‘trapped in Kashmir’