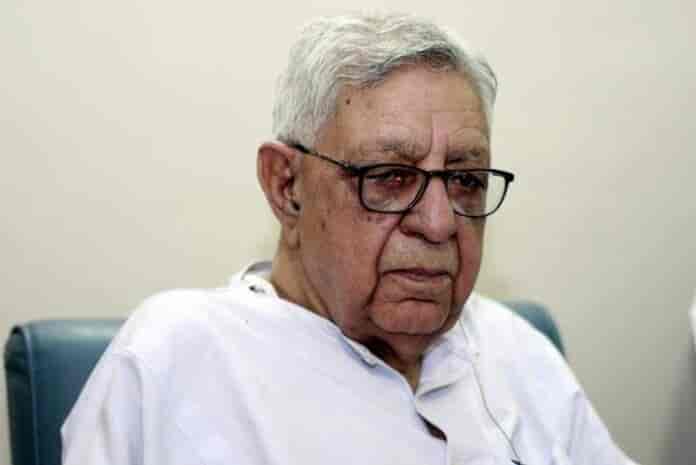 Krishan Dev Sethi, the last surviving member of the Constituent Assembly of the erstwhile state of Jammu and Kashmir, died at his residence in Jammu after a brief illness. He was 96.

“Sorry to hear about the demise of Jb (Jinab) Krishan Dev Sethi. He was the last surviving member of the Constituent Assembly of J&K and a former MLA. My condolences to his family and prayers for the eternal rest of his soul,” Omar Abdullah, a former chief minister and vice-president of the National Conference, said in a tweet.

Sethi was born in Mirpur, now part of Pakistan-Administered Kashmir, in January 1925 and had migrated to Nowshera area of Poonch in 1946.

He had joined the resistance movement in Mirpur against the Dogra regime. “We started resistance against this oppression when I was just 15. There was no other party except the National Conference on the ground,” Sethi had said in an interview with the Tribune India in 2019.

He was jailed for two years back in 1945 during the Quit Kashmir movement.

Soon after the 1947 partition, Sethi had played an important role in safeguarding Muslims in the Jammu region who were becoming victims of the communal riots.

He was then appointed as the rehabilitation officer by Sheikh Muhammad Abdullah in Rajouri and Poonch. But in 1953, after developing differences with Abdullah, he separated his path from his party and later joined the Democratic National Conference, a splitter group of National Conference headed by GM Sadiq Khan. Sethi was later appointed as state general secretary of the (DNC).

The party couldn’t survive long after Sadiq’s demise and other members of the party left. He then found a space in Left politics and joined the communist party CPM.

A man full of conviction and passion for J-K

Soon after the news of Sethi’s death, a huge section of people including politicians and senior journalists expressed condolence to the family and recalled his great work for the region.

“What was amazing about him was his conviction and passion for Jammu and Kashmir, for peace, and for socialist justice model of governance. And his entire life was the struggle for the state,” Kashmir Times editor and senior journalist Anuradha Bhasin told The Kashmir Walla. She described him as “a human with an extremely simple lifestyle and man of complete integrity and much humanity”.

“He was willing to share his knowledge and ideas. Though, he was a school dropout because as a young boy he had joined the Quit Kashmir movement struggle and he had been in jail for this reason,” said Bhasin. “Academically, he was in middle school pass out but he was a voracious reader and had a great sense of humour.”

The August 2019 episode, when New Delhi clamped down in the valley and revoked the limited-autonomy of the erstwhile state, saddened Sethi, said Bhasin.

“He was pretty shattered and the newspaper which he was publishing from Jammu – Jido Jagad (struggle), a weekly Urdu newspaper, he stopped publishing it after the abrogation,” Bhasin told The Kashmir Walla. “He was also disillusioned with what has happened to the region post-August 2019.”

Apart from being a member of J-K’s constituent assembly, Sethi was also part of the land reforms act.

When Sadiq joined Congress in 1961, Sethi continued his journey with the DNC and contested the assembly elections from Nowshera in 1962. According to news reports, he was first declared the winner by the then Returning Officer and within fifteen minutes was shown to have lost the election to his rival Master Beli Ram of Congress.

Sethi had alleged “alteration’’ of the election results and had claimed that it was done under pressure from the Centre. Sethi formed Democratic Conference along with Ram Piara Saraf, another communist leader who was then influenced by the Naxal movement in India and who too had lost the election in the Jammu division. The new party had an affiliation with CPI (M).

Sethi and Saraf soon went underground. Sethi later parted ways with Saraf and said that armed resistance had no role in Jammu and Kashmir as the land reforms, which made peasants the lawful owners of the land, had already been introduced.

Sethi always reminisced about the time in Mirpur – his birthplace. During a conversation with Bhasin last March, he had talked in length about his Mirpur days.

“He said I have wasted my entire life here. Why did I even come here? I should have gone back to Mirpur,” Basin recalled her last conversation with Sethi at his Jammu residence. “He was very emotional for his birthplace. Mirpur was very close to his heart.”