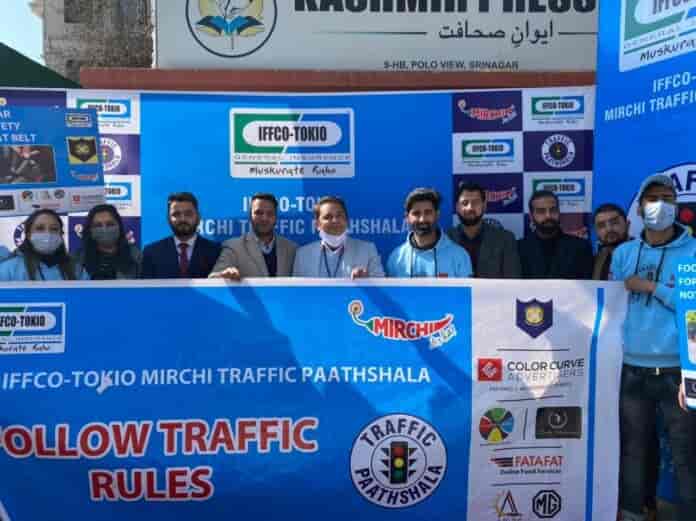 Amid a rising number of injuries and fatalities owing to road accidents in Jammu and Kashmir, 98.3 Mirchi FM launched a week-long road safety initiative called the “Mirchi Traffic Paathshala” on Tuesday.

The awareness campaign is being done in collaboration with IFFCO TOKIO General Insurance and the Jammu and Kashmir Traffic Police, Srinagar.

The campaign was inaugurated at the Kashmir Press Club by the Senior Superintendent of Police for Traffic Javid Ahmad Koul and Chief Manager Iffco-Tokio Mukhtar Ahmad Lone.

At the event, Mirchi FM’s RJ Mehak pointed out, based on data from the traffic department, that 694 individuals had lost their lives to at least 3,865 traffic accidents in Srinagar city alone in the past decade.

“It is about lives. This is the reason we collaborated to spread awareness. As RJs, me, Rafia, Vijdan; we all get so many calls related to the traffic issue,” said RJ Mehak.

Volunteers from the radio station have identified ten locations — Sanat Nagar Chowk, Hyderpora Chowk, Dalgate, Chanpora Chowk, Pantha Chowk, Lal Bazar, Batmaloo and Karanagar — that are the most congested and where they will hold placards to sensitise commuters about traffic rules and road safety till 23 February. \

RJ Vijdan, another popular radio presenter, said: “The misuse of high beam is something that I keep talking about on my show. Our volunteers will try and reach out to people about do’s and dont’s of traffic rules while I compliment the on-ground efforts with my on-air activity and social media campaign.”

“It is a dynamic process which requires all stakeholders to come forward.’’ said traffic SSP Koul, adding that several multi-level parking spots were coming up which would ease the traffic mess in the city.