‘LG will have to apologise’: PDP chief protests against Hyderpora killings 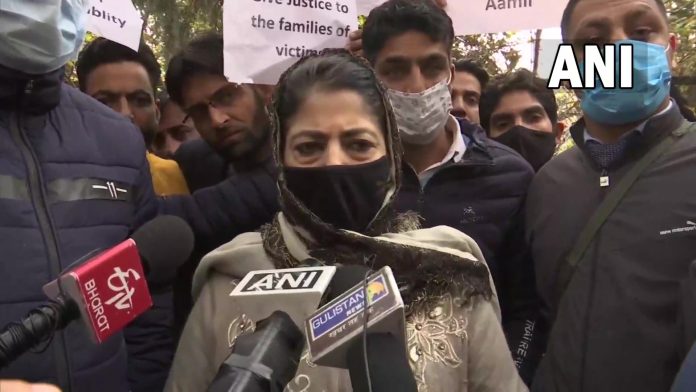 Mehbooba Mufti on Sunday lead a protest rally from Gupkar Road to the Raj Bhavan in Srinagar to protest against the recent killings of civilians during an alleged gunfight in Srinagar’s Hyderpora area.

Former Jammu and Kashmir Chief Minister and Peoples Democratic Party (PDP) president and her party workers marched from her residence up to the Raj Bhavan. She and her supporters raised slogans demanding end to killings in Kashmir.

“RSS and BJP have hijacked Hindutva and Hinduism in the name of their parties. Parties that want clashes between Hindus and Muslims can be compared not only with ISIS but also with other similar orgs as they kill people in name of religion,” She was quoted as saying by ANI.

“They’ll have to return the bodies and give compensation. LG will have to apologise. There should be a judicial probe,” she further added.

Last week, three civilians were found dead at the gunfight site in the Hyderpora area. Police had claimed that they had militant links, and they were buried in Handwara. However, after uproar the bodies of two of the killed were exhumed and buried in Srinagar. Body of one of the dead a resident of Ramban district was not returned to the families.

Mehbooba and her supporters also demanded that the body of Amir Magray, who was working as an office boy in the building where the alleged gunfight happened be returned to the family.

Meanwhile, L-G Sinha on Saturday promised that those found guilty will not be spared.

“An incident has taken place regarding a law and order and those found guilty will not be spared,” L-G Sinha said in Jammu.

A magisterial inquiry has also been ordered into the controversial gunfight.