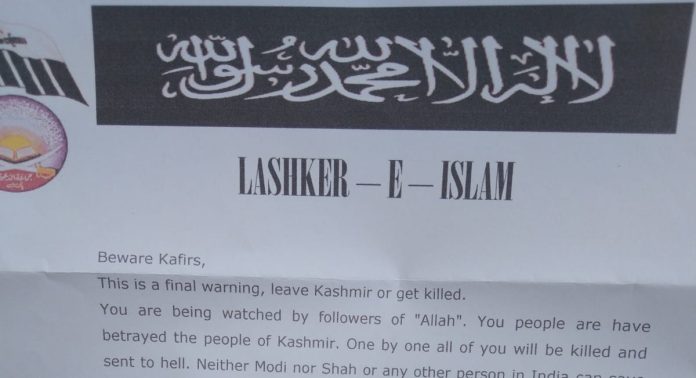 The letter, allegedly by a militant organisation, threatening Kashmiri Hindus to ‘leave Kashmir or get killed’ is dubious, Alt News reported.

The letter threatens to kill “kafirs” (non-believers) in Kashmir.

Agnihotri’s tweet received over 9,000 retweets as of this writing.

However, Alt News found that Vijay Raina tweeted the same letter a few hours before Vivek Agnihotri. Raina claimed that the letter was found in Veervan Pandit Colony in Baramulla and that it was “sent by post”.

The report further said, “The threatening letter was delivered via post to the security detail of the colony on Tuesday evening” and added, “however, it doesn’t seem to be real, according to the police, given the fact that the said militant organisation’s existence is uncertain. The police assured that robust precautions and security measures have been put in place nonetheless.”

According to the reports, there are also certain red flags in the letter that raise doubts about its authenticity.

Firstly, the letter merely says “commander” at the end, without the name and signature of Lashkar-e-Islam’s commander.

Secondly, the word “Lashkar” is misspelt as “Lashker” in the letter. It is unimaginable that the outfit would misspell its own name on official letterhead. Pakistan banned Lashkar-e-Islam on June 30, 2008, and a government document that lists proscribed organisations gives the correct spelling – “Lashkar”. It is noteworthy that the outfit’s name transliterated in English is also written as “Lashkar-e-Islami”. This is the spelling given in the document below prepared by the National Counter Terrorism Authority (NACTA) of Pakistan. However, both “Islam” and “Islami” are used even on Pakistani government websites. This is not the case with “Lashker”. Readers are requested to check for themselves by searching “lashker” site:gov.pk on Google.

Thirdly, on the left of the letterhead is a logo that belongs to a different militant group – Jamaat-e-Dawa (JuD). This outfit was banned by the United Nations in 2008 which recognised it as an alias of the proscribed Lashkar-e-Taiba militant group.

A simple reverse-image search (by cropping the logo from the viral letter) throws results revealing that the logo belongs to JuD. Furthermore, the Urdu text below the two swords in the circle (marked in black) itself reads “Jamaat-ud-Dawa Pakistan”.

Khuhro shared a genuine letter issued by the outfit where its flag is spotted in the top right corner. It doesn’t match the symbol in the viral letter. Furthermore, this letter is in Urdu, it is signed and has a completely different letterhead that says “Lashkar-e-Islam”, not JuD.

Previous articleCRPF head constable posted at DC office Pulwama dies
Next articleCBSE to restore single board exam for class 10, 12 from next year