Koshur hip-hop: Inside an ‘underground’ cypher in Kashmir 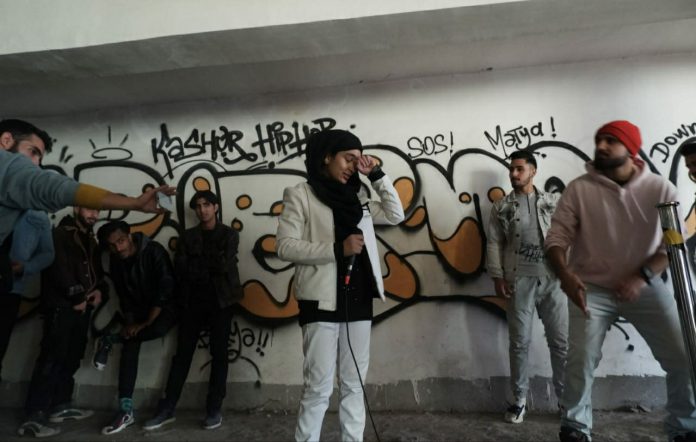 Standing amid a group of young men, next to a graffiti, Annie, a 17-year-old from Srinagar’s outskirts, held the mic closely. The beat dropped but she missed it. Performing for the first time, was she too nervous? One of the rappers took the mic, and screamed: “Make some damn noise for her!”

She picked it up again, freestyling over a decent background, and talked about the inequality. Among the crowd of nearly fifty people, mostly in their twenties, who cheered for the artists, Annie’s father sat. After he drove her amost ten-kilometers to attend the cypher, he sat in awe as Annie spoke of patriarchy in the society and increasing rape cases in her verses.

A nondescript multistoried building in Srinagar, the capital city, was hosting a cypher after a long, long break. Inside a dimly lit hall about forty-five feet wide, windows were left ajar for some sun. On one of the walls, a freshly painted graffiti read: “Cyphernama”.

In the cypher, an artist rapped on a certain topic that is quickly taken up or flipped by another rapper enters swiftly, playing off the prior words and themes. The cycle can run on continuously, as long as emcees, beatboxers, dancers, and the crowd can keep it going.

Alongside the names of Kashmir’s renowned hip-hop artists, including MC Kash and Straight Outta Srinagar (SOS), the walls are painted with contemporary Kashmiri slang like Matya, Bilya and Lamsa Wosta.

Last decade has been tumultuous for hip-hop in Kashmir. From a meteoric rise to a sudden fall to a shiny resurgence again, the genre has struggled to gain acceptance among the local masses.

However, the passion for hip-hop pushed four friends, Asim Khan, Jenice, Hashim and Sabia — all in their twenties — to organise the cypher. Khan was moved by the cyphers that he saw in New Delhi and had been wanting to organise on at his home.

Khan, who owns a cafe in Srinagar, told The Kashmir Walla that he put up a poster on the social media platforms just two days ago. It was then shared around by local artists. The noise in the building overwhelmed him, he said, looking at the artists from a distance. “It’s just to start  the culture if I tell you honestly,” Khan said.

The cypher was also attended by a couple of popular names, including Tufail Nazir — one of the artists from SOS, the hip-hop duo. When Tufail took the mic and rapped a verse from one of his tracks Psycho, the crowd bursted in cheers, keenly listening to his every word.

“I think this thing was needed as we need more and more artists from the valley,” Khan added.

But it wasn’t an easy decision. In Kashmir, there has been a widespread crackdown on free speech for years; recently, it was intensified after New Delhi revoked the region’s limited autonomy, and clamped curfews, in August 2019.

The organisers were clear: no unwanted guests “to avoid the troubles”. In the poster, Khan clearly mentioned that the location won’t be disclosed. “I can’t trust the area and I can’t trust the situation in Kashmir,” he said. “I wasn’t sure who else would be coming here.”

“I was scared, you never know, when the police might come and book me under PSA,” he said with a laugh, referring to a draconian preventive detention law in Kashmir.

The year 2010 marked hip-hop on Kashmir’s map when Roushan Ilahi, aka MC Kashmir, dropped his single “I Protest” — a commemoration of the 2010 civilian uprising. With time, as streaming music online became accessible in Global South, the community grew with more artists releasing their own music.

The new-age artists, including Ahmer Javed, SOS, and Qafilah, have explored a wide range of styles with the genre, hoping to reach wider audiences.

Another organiser, Sabia Rasool, a 24-year-old from Kak Sarai, said that hip-hop is a collective effort and roots back to the idea of resisting the powerful, referring to its emergence in New York’s suburbs in the 1970s.

“Even if we get nothing [out of the event], at least we will get to know people who are into this culture,” she told The Kashmir Walla. “And we got to know them.” In search of a female rapper for the cypher, Rasool said that she found Annie after a long search.

Adding that the genre is a male-dominated space in Kashmir, Rasool said that Annie’s female participation was very important. “I’m hopeful that this will change. This is our first step towards the change,” she said. The organisers are hopeful to continue with cyphers every month “for the young artists who don’t get many platforms”.

Khan concluded: “The idea behind this cypher was that if there is an artist from Kashmir, why do they need to wait for labels outside Kashmir to sign them?”