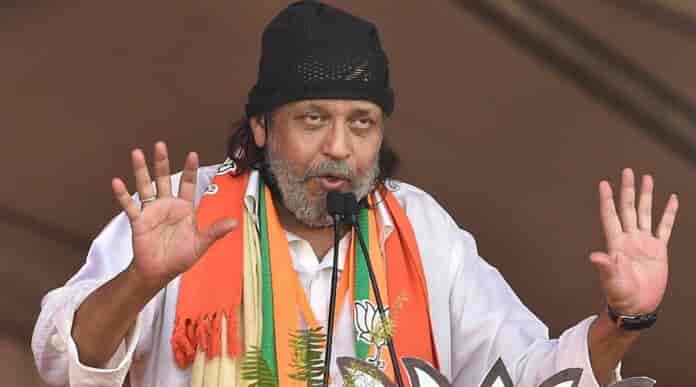 Kolkata Police on Wednesday questioned actor and BJP leader Mithun Chakraborty for allegedly making a controversial speech during the election campaigning in Bengal.

The questioning, which was held virtually, began at 10:40 am and lasted for nearly 45 minutes.

Chakraborty had moved the Calcutta High Court for quashing of the FIR against him. The court, however, instructed him to cooperate in the investigation virtually.

On 7 March, while addressing a gathering in Kolkata’s Brigade Parade Ground, Chakraborty had said, “Ami joldhorao noi, bele borao noi… ami ekta cobra, ek chobol-ei chobi (Don’t mistake me for a harmless snake, I am a cobra, can kill people in one bite’).” The dialogue is from his 2006 film, ‘Abhimanyu’.

A Trinamool Congress (TMC) worker had filed a police complaint on May 6 against Chakraborty for “instigating and provoking” BJP workers on the basis of which an FIR was filed. In the complaint,  it was alleged that the actor’s remarks like “Marbo Ekhane Laash Porbe Shoshane” and “Ek Chobole Chobi” were meant to provoke BJP workers.

Chakraborty has been booked under IPC sections 153 (A) (Promoting enmity between different groups), 504 (Intentional insult with intent to provoke breach of the peace) and 505 (with intent to incite people). A case has been registered at Maniktala Police Station.