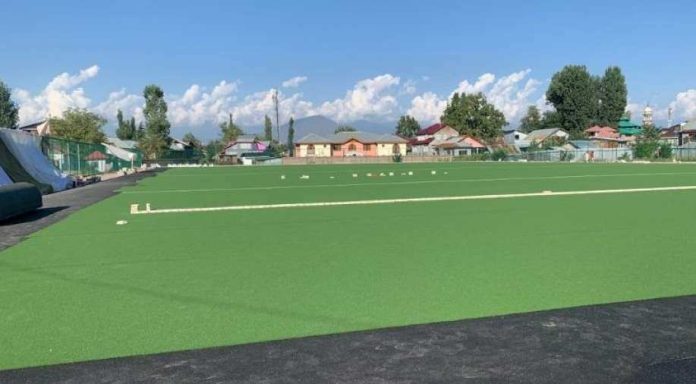 The first synthetic hockey turf stadium in Kashmir constructed in the Pulwama district is yet to be thrown open because of the lack of water facilities.

The stadium constructed in the Government Boys Higher Secondary School Pulwama at a cost of Rs 5 crore. Many hockey players said the stadium would have encouraged youth to take up hockey as sports but the lack of facility has hampered it.

They said that they can play but the chances of injuries remain very high in absence of water.

He said that the stadium was expected to be completed last year but missed the deadline due to some technical issues. Currently, the only thing which delays its opening is the lack of water.

Though, according to him, a water sprinkler system is in place except for the source of water for which the bore well is been dug.

He said that in the coming days the ground will get the water facility and accordingly it will be handed over to the concerned department and thrown open.

He expected that international players will also play in the stadium as they are planning to ready facilities for night stay around the stadium. (KNO)

Previous articleKU’s education quality is talked about across country: LG Sinha
Next articleBlack bears roam in north Kashmir village for nearly a week