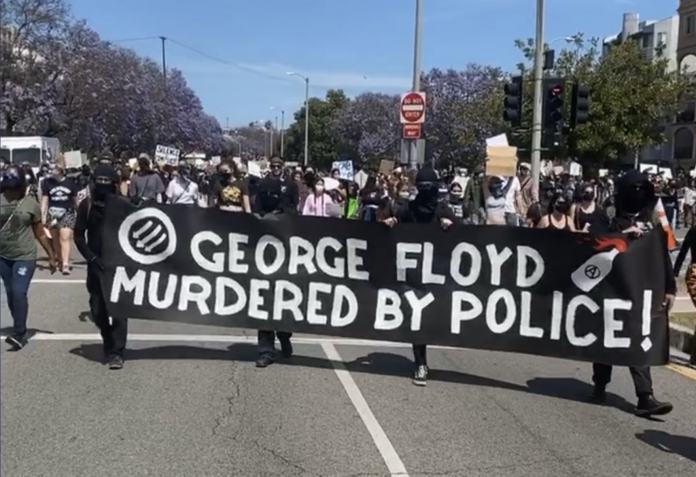 The hashtag #BlackLivesMatter – originally coined by an international rights advocacy group with the same name, against systemic racism towards black people – is trending in India. The hashtag has resurfaced this time after the killing of a black man by the police in the United States.

Forty-six-year-old George Floyd, a security guard at a restaurant in the Minnesota city, was reportedly killed after a white police officer handcuffed and knelt on his neck for several minutes despite him pleading not being able to breathe, reported The Guardian.

The police officers were detaining Mr. Floyd over an alleged fake $20 (Rupees 1,500 approximately) currency note that he used to buy a pack of cigarettes.

Protests have continued in cities across the US for more than a week after Mr. Floyd’s killing. In Minnesota, protesters have set fire to a police station besides reports of robbers taking advantage of the unrest to rob stores across different cities. A state of peacetime emergency has been declared in Minnesota state and the US National Guard deployed as the protests continue.

Four police officers have been fired and the US Federal Bureau of Investigation has been opened an investigation into the killing. Derek Chauvin, the officer seen in the viral video, kneeling on George Floyd, has been arrested and charged with third-degree murder.

US President Donald Trump, on Thursday, tweeted that those involved in protests were “thugs” and that “when the looting starts, the shooting starts”; the tweet was restricted by Twitter for “glorification of violence”.

The police in the US is dominated by ethnic white officers and has been criticised by rights groups for its bias against minority ethnic groups in the country, particularly those of African descent. Four police officers, including the one who knelt over Mr. Floyd’s neck, have been fired from their jobs on Tuesday.

The trend began in India after prominent citizens, including journalists, expressing solidarity with African Americans. Approximately 60,000 Africans of different nationalities reside in India, many of whom face racial discrimination at some point. Most Africans in India are generally referred to as “Nigerians”

After seeing these racist attacks against Africans, me thinks it’s time to start our very own #BlackLivesMatter movement here in India.— Zakka Jacob (@Zakka_Jacob) May 30, 2016

Indians tweeting in solidarity with the victim of majority bias has unsurprisingly led many to question the display at a time when the country grapples with rising Islamophobia and resultant hate crimes against minority groups, particularly Muslims. Several prominent Indians propagating hateful content online are linked to the ruling Bharatiya Janata Party.

The trend also comes at a time when several Indians, who migrate to big cities across the country in search of jobs, have died attempting to reach their homes during the lockdown in the wake of the coronavirus pandemic.

Sorry but I just find it supremely annoying that Indian celebrities are feeling bad about what happened in the US (as they should) but don’t give a rats a** about what’s happening in India. #BlackLivesMatter but #MigrantLivesMatter not, I guess.— Anisha Padhee (@anishapadhee) May 29, 2020

Social media users in Kashmir have also used the hashtag to question the “selective outrage” of Indians in expressing solidarity with African-Americans while avoiding comments when it comes to rights abuses in Kashmir. Many have asked for the same solidarity to be shown when civilians are killed in the Kashmir Valley; more than 70,000 have lost their lives to the turmoil, according to Amnesty International.