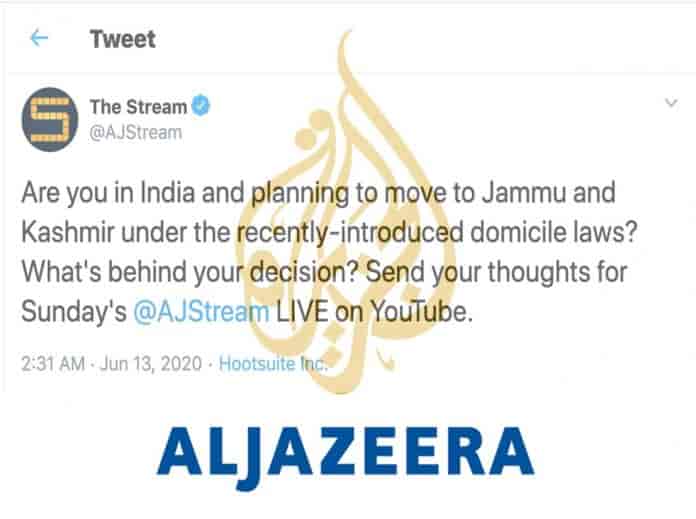 On Saturday, 13 June, the Al-Jazeera network, funded by the Qatari government, asked through its social media community, The Stream: “Are you in India and planning to move to Jammu and Kashmir under the recently-introduced domicile laws? What’s behind your decision?”

The Stream’s question is aimed at gathering responses for an upcoming show on Sunday. The tweet led to an outpour of criticism from Kashmiri social media users for the otherwise popular news channel.

Kashmiris on Twitter were quick to call out Al-Jazeera, accusing them of “promoting settler colonialism”. The social media users were mainly drawing a parallel with expansionist or colonial settlements of Israeli Jews in Palestine or of Han Chinese in Xinjiag to forcibly settle and diffuse indigneous identity.

Since August 2019, when the Narendra Modi-led central government revoked Jammu and Kashmir’s (J-K) semiautonomous status, demographic change in the country’s only Muslim-majority region is one of the most heated debates and a cause of concern among the region’s native Muslims.

Shortly after the revocation of its limited autonomy, the ruling Bharatiya Janata Party’s ministers celebrated it citing that now “everyone [Hindus in mainland India] can marry a fair Kashmiri [Muslim] girl”, the Union Home Minister Amit Shah repeatedly assured that “talks of demographic change is baseless”.

However, on 1 April, the government imposed a framework, at midnight, to redefine the definition of domicile when millions of J-K’s residents were confined indoors owing to the then freshly imposed lockdown to contain the spread of the COVID-19 pandemic.

The new law allows domiciliary rights to non-natives if they meet any of the following criterion: 15 years of residence, or 7 years of education and appearance in either 10th or 12th standard examination, or 10 years of residence for central government employees, including the hundreds of thousands of forces’ personnel who have been stationed here for military service, and their children.

Since the announcement of the new domicile, people in the region have grown wary of the law. Talking to The Kashmir Walla in April 2019, Gul Mohammad Wani, professor of Political Science at the University of Kashmir, had said that the Bharatiya Janata Party is moving on harshly with it’s agenda because people are silent on the streets. “But people won’t stay silent always.” He noted “a sense of loss” among the people as the structural fault lines in the new domicile becomes clearer.

“Muslims in Kashmir are feeling vulnerable for their identity,” he had said. “A demographic expulsion could be foreseen and the majority community is afraid that they will be reduced to a minority.” Mr. Wani had added that if the central government keeps failing at protecting the rights of Kashmiris, then later–if not immediate–the region will spin into instability.

The Stream’s tweet was seen by many as insensitive and users accused the network of “normalising” the purported plans of the Hindutva forces to alter Kashmir’s predominantly Muslim demographic. One user wrote, “Normalizing settler colonialism and genocide, are ya? Here is how you should ask this question: ‘Are you in India and planning to participate in forcibly changing Kashmir’s demography without the democratic consent of the people of Kashmir?’”

While some other social media users took a dig at The Stream and started a meme-war. One user wrote, “Come for the spectacular internet speed, stay for the world’s strictest lockdown.” While a few others highlighted the decade-long conflict in the region to stay back: an user wrote, “Yes, I have suicidal tendencies.”

The tweet elicited several bitter and abusive comments from native and non-native residents alike. Many users called The Stream to pull down the tweet. In the thread, a user exclaimed: “Like it’s a GODDAMN VACATION!”