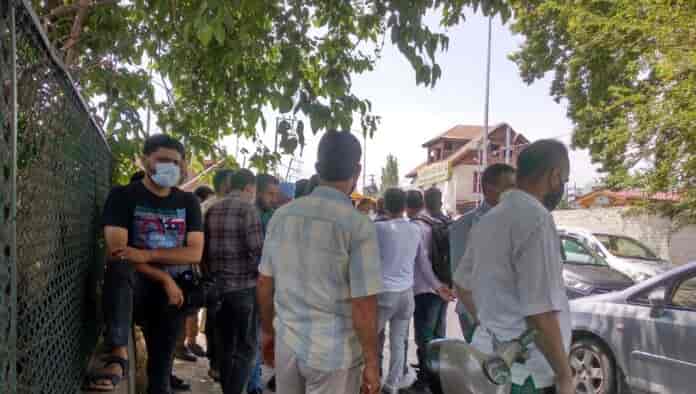 Media personnel boycotted a press conference of a Sikh body after some Sikh leaders tried to manhandle them before the start of the presser in Srinagar.

Leaders of Sikh Community were scheduled to hold a press conference at Gurudwara Shaheed Bunga Sahib, Baghat Barzulla at 11 am today. The organizers had requested media personnel to cover the presser. An invitation was extended to media by Santpal Singh, President Gurudwara Prabandak Committee Budgam.

Before the start of the press conference, some Sikh leaders accused media of bias reporting related to Rainawari incident and alleged that four Sikh girls are still missing, forcibly converted and media is not reporting about these episodes.

When one of the senior Journalists tried to make them understand that the job of media is to listen to all and report facts, some Sikh leaders lost cool and abused the Journalist.

“It was very unfortunate that we were attacked as if we are responsible for what has happened. They not only abused us but also tried to manhandle us. We were left with no option but to boycott the presser,” one of the Journalists told a local news agency Kashmir News Trust.

Another Journalist said that some Sikhs used unparliamentary language.

As reported earlier, some of the Sikh leaders, mostly from New Delhi alleged forcible conversion of some Sikh girls in Kashmir, an allegation refuted by some local Sikh leaders.

Meanwhile, a Sikh leader from Gurudwara Prabandak Committee feigned ignorance about today’s incident saying they apologize if anybody has hurt and misbehaved with media personnel. (KNT)

Previous article75-yr-old woman dies by suicide in central Kashmir
Next articlePandemic’s next wave is imminent: Is Kashmir prepared this time?