J-K youth shot at during anti-CAA protest in Delhi 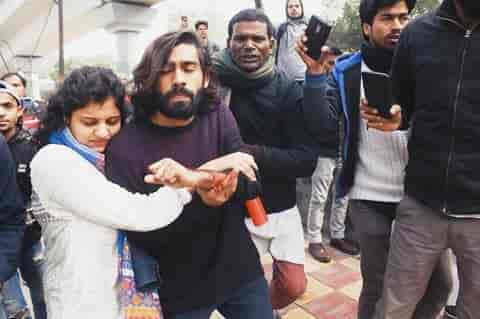 Srinagar: A student from Jammu and Kashmir’s Doda district was injured during anti-CAA protests in New Delhi’s Jamia Millia Islamia University on Thursday after a man opened fire from his pistol at the protestors.

The students, who were part of the protest alleged that the entire drama took place in presence of police and media. The man was overpowered by police and taken into custody. The incident triggered panic in the area. Witnesses told wire service over phone that a man wearing a jacket and pant while walking on a road shouted “Ye Lo Azadi.”

A group of students present at the protest said that the man then opened fire from his pistol injuring one of the students who was identified as Shadab Farooq, a mass communication student and a resident of Bhaderwah area of Jammu.

A student said that Shadab was hit in his hand and was aken to AIIMS. The students were heading from Jamia to Mahatma Gandhi’s memorial Rajghat. “The firing incident took place in very presence of police and media.

We begged before police to arrest the man, but they didn’t act on time,” Amna Asif, a student alleged. The march was stopped at the Holy Family Hospital near the university. A police official in Delhi police said that man has been arrested and is being interrogated for his act. (KNO)

Previous articlePotential threat of coronavirus in Kashmir; needs to be prepared for emergency: DAK
Next articleHizb militant arrested in north Kashmir