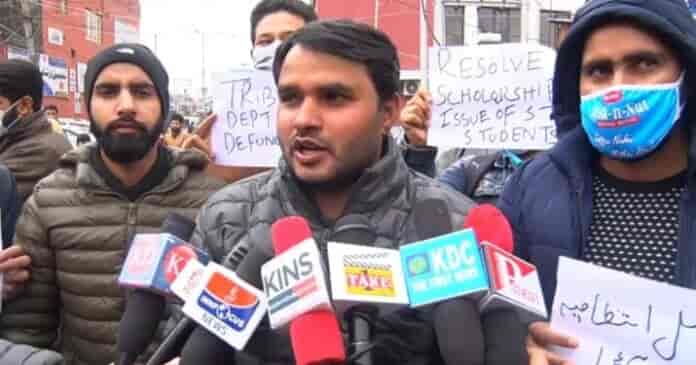 The Protest was led by Zahid Parwaz, its State President. While speaking with the media persons, Zahid alleged that the Tribal Affair department has made the life of Tribal students like hell as even after a long wait of eleven months ST Scholarship to students have not been disbursed, news gathering agency Kashmir Dotcom reported.

Zahid alleged the department has become the hub of corruption, those who pay bribes to the authorities would release the Scholarship in their favour, those who don’t pay them bribes they are made to suffer and harassed.

He said: “Only five to six thousands students have applied for scholarships but authorities have failed to provide them scholarship on time which is the matter of great concern.”

They have appealed to the lieutenant governor to personally look into the matter and direct concerned authorities to release the scholarship. (KDC)

Previous articleOnline classes will be voluntary, says J-K govt in modified order
Next article“Where should we go?”: J-K govt cuts trees of farmers in Budgam