It is something that I won’t forget in a hurry: Omar on meet with PM Modi before article-370 abrogation 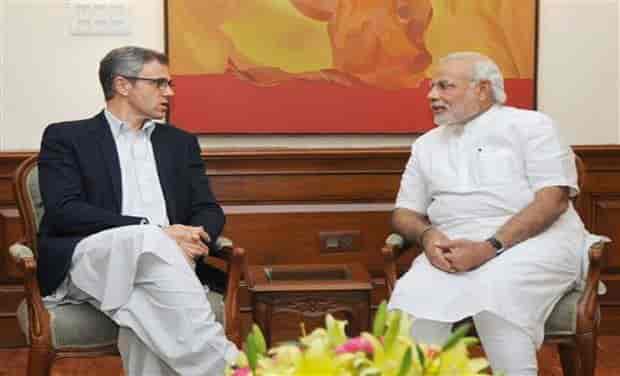 Former chief minister of Jammu and Kashmir (J-K), Omar Abdullah has stated that he won’t participate in the assembly election if the statehood is not restored to J-K. “I simply cannot and will not be a member of a House that has been disempowered the way ours has,” he wrote in a column for Indian Express.

On 5 August 2019, the Government of India detained many prominent Kashmiri unionist leaders and, in New Delhi, tabled a bill to downgrade the erstwhile state into two union territories.

Calling the August decision “tectonic changes”, Mr. Abdullah said that it is “still impossible to come to terms with what I saw being rolled out on my television set that morning.” Initially, he was placed under house arrest and later shifted to a government guest house.

On the argument of article 370 being a temporary provision in the constitution, Mr. Abdullah wrote: “What they forget to add to this sentence is that it was temporary because of the little matter of the United Nations Security Council resolution 1947 of 1948, but that’s an entirely different op-ed in itself.”

“The Parliament of India spent less than a day each in the Lok Sabha and the Rajya Sabha to change more than 70 years of history, to undo the sovereign commitments made to the people of J&K and to dismember the state,” he wrote.

He added that though the decision by the Bharatiya Janata Party (BJP) “wasn’t a complete surprise” as it had been one of the main agendas of the right-wing political party for decades. “What came as a shock was the humiliation heaped on the state by downgrading it and splitting it into two Union Territories,” Mr. Abdullah wrote on the first ever such downgrading of a region.

“The people were treated to categorical denials by the occupant of the highest office in the state, the Governor, that J&K’s special status faced no threat,” he said, adding that the Governor debunked the rumours, saying that the additional forces were required for Assembly elections later in the year.

He also made his stance clear that the special constitutional status enjoyed by J-K “was not a favour done to the state,” but formed the basis of the state’s accession to India. And, he added, all that J-K asked for was to have certain safeguards built in the Constitution to protect this unique status.

“It was understood that so long as J&K remained a part of India, the special status enjoyed by it would remain,” he wrote. J-K has kept its side of the promise by remaining a part of the Union, the last 30 years of militancy notwithstanding, he wrote, it has participated in the democratic processes and tried to share in the nation’s development, but the promise made with it was not kept.

The vice president of the National Conference (NC) added that he fails to understand the need for this move, “except to punish and humiliate the people of the state.” “If the reason for carving out a separate Union Territory for Ladakh was the public demand among the Buddhist population of the area, then the demand for a separate state for the people of Jammu is a much older demand,” he said. “If the demand was conceded on religious grounds, then it ignored the fact that Leh and Kargil districts, which together make up the Union Territory of Ladakh, are Muslim majority and the people of Kargil are vehemently opposed to the idea of being separated from J&K.”

“That the occupant of such a high office deliberately lied to the people or that he wasn’t kept informed?” he questioned. “I know what I believe but you can draw your own conclusions.”

Mr. Abdullah also wrote about the NC meeting with the Prime Minister Narendra Modi a few days before 5 August: “It’s not a meeting I will forget in a hurry. One day I may write about it but propriety precludes me from saying more than that we left the meeting with a completely different impression about what was going to unfold in the next 72 hours.”

“In one fell swoop, everything we had feared came to pass,” he added.

Commenting in a more than 1,500 words long column, Mr. Abdullah also questioned if the claims behind the abrogation of the special status were even met. “It was alleged that Article 370 has fuelled separatism and allowed militant violence to thrive in Kashmir, an end was supposed to herald the end of terrorism,” he wrote. “If that be the case, then why is it that almost a year later the same Union government is forced to tell the Supreme Court that violence in J&K is increasing?”

He added that prior to the outbreak of militancy in the state, J-K was amongst the most progressive states with a growing industrial base and impressive investment in manufacturing. “Tourism was a sector that was coming in to its own as far as investments were concerned. What has stopped J&K from attracting investment is the security environment and that’s why a year after the momentous changes there has been no investment worth the mention,” he wrote.

Even the Supreme Court, as recently as 2018, has held that Article 370 “had acquired a permanent status by virtue of its years of existence making its abrogation impossible,” he claimed. And he also added that “there is no constitutional, legal, economic or security justification for what was done to J&K on August 5, 2019,” citing it as a pretext of the basis of the NC’s case in the Supreme Court.

On all of these questions, Mr. Abdullah said that it is important to ask whether it is better to be popular or to be right. “Removing J&K’s special status may have been the popular thing to do but going back on a nation’s sovereign commitments is never going to be the right thing to do.”

Explaining the position of his party, the NC, he stated that it does not agree with what has been done to J-K nor do accept what has been done. “We shall oppose this, our opposition will continue in the highest court in the land in the form of the legal challenge filed in the Supreme Court last year,” he wrote. The NC has always believed in democracy and peaceful opposition, he wrote, “sadly these very democratic rights were trampled on a year ago.”

“With almost all of my senior colleagues still detained in their homes, the NC is yet to meet to decide its next political course of action and I will work diligently to strengthen the party, carry forward its agenda and continue to represent the aspirations of the people while we fight against the injustices heaped on J&K in the last one year,” he wrote.