“It has no wheels”: China unveils ‘floating’ train that can travel at 620 kmph 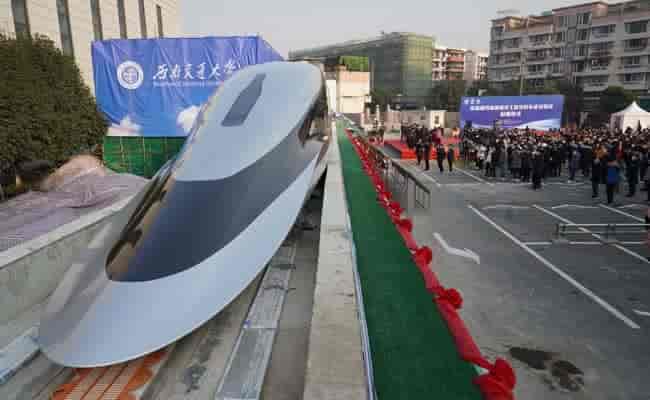 Created by scientists at the Southwest Jiaotong University, the train has no wheels. Instead, the magnetic levitation train has been developed with high-temperature superconducting (HTS) technology, which uses magnets that allow it to ‘hover’ above the track, according to The Independent. This makes it look like the train is floating along the magnetized tracks and allows for faster, frictionless travel.

The 69-foot prototype was unveiled in Chengdu on Wednesday. At the launch ceremony, the train was seen floating slowly along the track.

“The superconductor technology the train employs could make it faster and lighter than its peers,” state-run Xinhua News said in a tweet while sharing footage of the prototype.

The debut of the ‘floating’ train has been hailed as a “zero to one” breakthrough in the country’s development of HTS technology, reports CGTN.

While the train was unveiled with much fanfare, it could be some time before it is operational. Researchers are hoping to make it fully operational in the next three to 10 years.

The new maglev train is part of China’s plan to create faster links between its cities. This one is designed to travel at 620 kmph, which could reduce the travel time between London and Paris to a mere 47 minutes. Already, researchers are working to stretch that speed to 800 kmph.