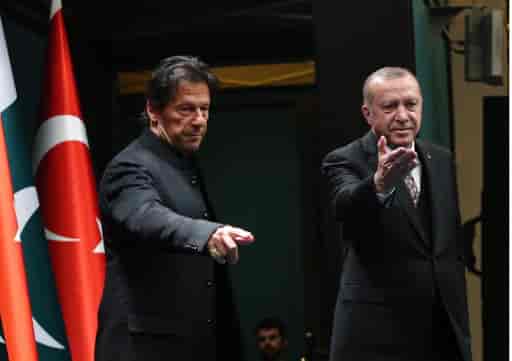 Earlier this month, Pakistan’s Foreign Minister Shah Mahmood Qureshi warned that if the Organisation of Islamic Cooperation (OIC) did not convene a meeting of its Council of Foreign Ministers on the Kashmir issue, Islamabad would call a separate meeting of Muslim nations.

Mr. Qureshi had made these comments on 5 August, the day that marked the first anniversary of the abrogation of Jammu and Kashmir’s decades-old semi-autonomy.

Speaking to the media, Mr. Qureshi said: “I am once again respectfully telling O.I.C that a meeting of the Council of Foreign relations is our expectation. If you cannot convene it, then I will be compelled to ask Prime Minister Imran Khan to call a meeting of the Islamic countries that are ready to stand with us on the issue of Kashmir.”

Islamabad’s newfound disdain for the Arab-led OIC has come at a time when the chorus grows in favour of an alternative Muslim bloc, free from the hegemony of the Arab nations.

Mr. Mahathir had then sought to convene a summit in Kuala Lumpur, in December 2019, inviting Pakistan, Turkey, Qatar, Iran, and Indonesia while describing the summit as “the first step towards rebuilding the great Muslim civilization.”

While Mr. Khan formally accepted the invitation initially, Islamabad pulled out of the event at the last minute. The reason being, rather oddly spelled out by the Turkish President Erdogan, alleged pressure from Saudi Arabia.

“Unfortunately, we see that Saudi Arabia pressures Pakistan. Now, there are promises that they [Saudis] have given to Pakistan regarding the central bank. However, more than that, there are four million Pakistanis working in Saudi Arabia. They [threaten by saying that they] would send [Pakistanis] back and employ Bangladeshi’s instead,” Mr. Erdogan had told Turkish media.

Saudi Arabia had not only shunned the meeting but also criticized the event as undermining the bigger OIC, an organization over which the Saudis have a near-monopoly. Since Pakistan and much of the Arab world boycotted the event, the Kuala Lumpur Summit failed to attract much fanfare and eventually the political project received another setback after Mr. Mahathir’s resignation earlier this year.

However, the events of the last few months in Kashmir appear to have rekindled the possibility of an alternate Muslim alliance, and this time, Pakistan seeming confident to cross the red line set out by the Saudis.

Established in 1969, the Islamic grouping consists of fifty-seven member states and is heavily influenced by Saudi Arabia and its other Arab allies. With Pakistan being one of its founding members and the strongest military, besides being the only nuclear power Muslim nation, the OIC had long conformed to Pakistan’s stand on Kashmir.

But in the wake of Indian actions of last August, even though OIC issued several statements condemning New Delhi’s move, it refused to heed to Pakistan’s repeated requests to hold a conference of foreign ministers on Kashmir issue. This is not hard to comprehend. Over the years, the relations between the Gulf countries and India have strengthened manifolds.

Last year, in the backdrop of India’s revocation of J-K’s limited autonomy, Prime Minister Narendra Modi and Saudi Crown prince Muhammad Bin Salman signed a pact for the establishment of a Strategic Partnership Council (SPC), making India only the fourth country with which Riyadh has formed such an alliance.

Similarly, in 2018, India also signed a pact with Oman that allows the Indian navy to use the strategic port of Duqm, which overlooks the Arabian Sea and the Indian Ocean.

While these developments had visibly annoyed Pakistan, the United Arab Emirates—that signed a peace deal with Israel—went a step further termed the abrogation of J-K’s limited autonomy as India’s “internal matter”.

With no clear support on Kashmir in sight from the Arabs, Pakistan is now increasingly trying to find new allies within the Muslim countries to support its Kashmir cause. Among them, the most receptive has been Turkey.

Like most Arab countries, Turkey has historically supported Pakistan and criticized India on Kashmir. But while doing so, Ankara again, like its Arabian counterparts, had acted cautiously and only extended its support to Pakistan to verbal demarches.

However, the incumbent premier Mr. Erdogan has changed this stance and the rhetoric. Addressing the Pakistani Parliament earlier this year, Mr. Erdogan likened the struggle of Kashmiris with the Ottoman Empire’s fight during the First World War.

Drawing comparisons with the Battle of Gallipoli between Allied powers and the Ottoman Empire, Mr. Erdogan said: “There is no difference between Gallipoli and Kashmir. Turkey will continue to raise its voice against oppression.”

Mr. Erdogan’s support to Kashmir and his regular courting of Pakistan, the only nuclear power Muslim nation, is not hard to understand says Oktay Bingol who heads the department of international relations at Istanbul Arel University.

“Turkey has for long been isolated in the Middle East,” he said. “It has no influence either in the Arab League or the OIC, which are well-established organizations of the Islamic world. It, thus, seems that Turkish leaders regard an alignment with Pakistan as a window of opportunity to gain new partners and recover from its regional isolation.”

Relations between Ankara and Riyadh have seen a total rupture since the assassination of the Saudi writer, Jamal Khashoggi, in the Saudi consulate in Istanbul in 2018. The ties soured further earlier this year, as Saudi Arabia announced its full support for Cyprus’ (Greek) sovereignty over an island claimed by Turkey. Besides, the two countries also support rival militias in Libya and Syria as well.

As such, Turkey’s Kashmir policy also serves the purpose of isolating Saudi Arabia according to Mr. Bingol. “Since Pakistan exclusively forms its foreign policy through the lens of Kashmir, Turkey wants to eliminate Saudi influence on Pakistan by leveraging Kashmir.”

Another plank of this potential Muslim bloc is Iran which shares borders with both Turkey and Pakistan. Although Iran has traditionally been at odds with both Ankara and Islamabad, the country has drastically improved its ties with both its neighbors in recent years.

While Iran saw a strategic convergence with Turkey in Syria, it has also increasingly taken a pro-Pakistani stand on Kashmir. Iran’s Ayatollah Khamenei was the first to criticize India’s Kashmir move and asked New Delhi to adopt a just policy towards Kashmir. His deputies were even harsher calling Indian actions as “ugly” and “barbaric”.

If the rhetoric of the Iranian clergy is any indication of Tehran’s priorities, it is likely that Iran plans to upgrade its ties with Pakistan and back its narrative on Kashmir. What might also hasten ties between Iran, Pakistan, Turkey, and the growing realization among them to institutionalize their relations, is the overarching role played by China.

All the three countries are a part of China’s Belt and Road Initiative (BRI), a Chinese-led network of infrastructure projects spanning across nearly seventy countries in Asia, Europe, and Africa. Out of those seventy countries, Pakistan and Iran are the largest recipients of funds and loans from China.

While China has invested close to $60 billion in the China Pakistan Economic Corridor (CPEC), a recent report has disclosed that the Chinese has proposed nearly $400 billion worth projects to Iran. Coupled with a similar series of investments in Turkey and Central Asia, China is spending roughly a quarter of a trillion dollars to boost its strategic and economic presence in the region.

The economic coupling between these countries under a larger Chinese financial clout is bound to lead to strategic convergences among them, says Arif Kamal, Pakistan’s former ambassador to Qatar and Jordan.

“China’s BRI is an effective instrument of connectivity in the region, and therefore will generate shared stakes in peace and stability for the regional countries,” he said. “One can see through this new reality as providing an impetus for the regional states to break some of the colonial and neo-colonial patterns.”

The ambassador added: “Besides Pakistan, Iran and Turkey are continuity in geography, history and civilizational growth. The convergence in their very make-up asks for greater co-operation. Perceptibly, BRI should only reinforce the existing points of convergence that have roots in the shared civilization.”

Still, it might be too early to assume the possibility of an alternate Muslim bloc. More than any other country, Pakistan still has a lot to gain from co-operation with the Gulf countries.

On Tuesday, Pakistan’s all-powerful Army Chief Qamar Bajwa met the Saudi ambassador and later announced that he will be visiting Riyadh in the following week.

But if the centrality of Pakistan’s foreign policy around Kashmir and the propensities of Gulf countries to improve their ties with India are any indication, even the generals in Pakistan cannot prevent the rupture with the Gulf.

And when that happens, Pakistan may well end up fulfilling the wishes of Mahathir.