Iranians in Tehran stage protest against “massacre of Indian Muslims” 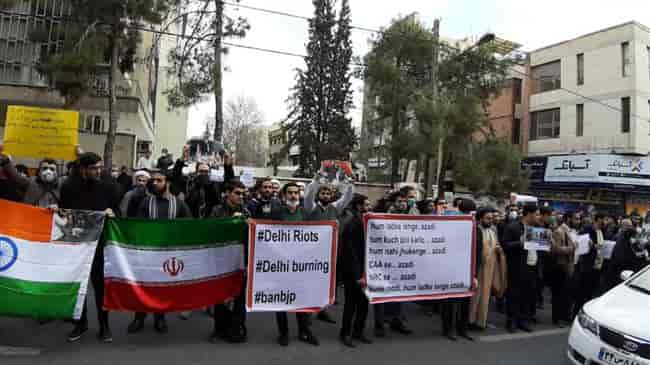 Iranian from all walks of life held a protest in front of the Indian Embassy in the capital Tehran against the recent “massacre of scores of Muslims by Hindu mobs amid New Delhi’s discriminatory measures targeting subscribers of Islam.”
The protesters included university students, and seminarists, Press TV reported.

The rally was held on Tuesday in condemnation of the brutal killing of more than 40 Muslims during a four-day span of violence that began in the Indian capital on February 23.

The violence saw the mobsters setting mosques on fire and burning Muslims alive in their homes or dragging them out into the streets and lynching them. Hundreds more were also injured during the melee.

The Iranian demonstrators shouted slogans and held up placards bearing statements in support of the Muslims and denunciation of the slaughter, Fars News Agency reported. Some held up pictures showing the harrowing aftermath of the bloodshed.

The protesters urged international and humanitarian organizations to break their silence on the atrocity, decrying censorship attempts aimed at imposing a media blackout on the violence.

“We should not be indifferent towards bloodshed of Muslims in India. It is essentially our duty to level support behind whoever person that is facing oppression, since supporting the oppressed people is among the major mottos of [Iran’s] Islamic Revolution,” one protester told the agency.

The participants likewise called New Delhi to account over the massacre and asked the Islamic Republic’s diplomatic authorities to contribute to efforts that would prevent such atrocities.

On Monday, Foreign Minister Mohammad Javad Zarif wrote a tweet, urging “Indian authorities to ensure the well-being of ALL Indians & not let senseless thuggery prevail,” adding that the “path forward lies in peaceful dialogue and rule of law.”

India summoned the Iranian ambassador to New Delhi afterwards to protest the comments. The Indian Foreign Ministry’s Spokesman Raveesh Kumar said a “strong protest was lodged against the unwarranted remarks,” which he called “not acceptable.”

The violence came following protests by India’s Muslim minority against the Indian government’s approval of a controversial law last December. The law offers a path to Indian citizenship for six religious groups from three neighboring countries, but specifically excludes Muslims.

Kumar, however, defended the legislation, saying the government was confident in its legality.

Critics insist the law is discriminatory and comes in the wake of other severe government measures against the country’s Muslim population such as withdrawal of autonomy for Muslim-majority Jammu and Kashmir province that has intensified discord across India about the future of its 200 million Muslims.