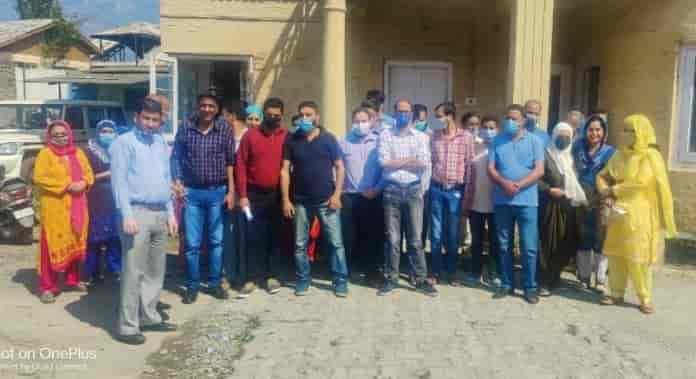 The employees at Directorate of Information and Public Relations on Tuesday went on a strike and staged a protest in Srinagar after the Director Information Jammu and Kashmir ordered a ‘salary halt’ for unknown reasons.

While talking to a local news agency, Kashmir Dot Com (KDC), Vice President employees union, Bilal Ahmad said that the employees have been working around the clock every year, despite all this we are being treated like absconders.

“We have a work schedule of 15 hours, we have employees who have been deputed to Sonamarg for union minister Nitin Gadkari’s event. They left Srinagar at around 5;30 in the morning and will return late in the evening. Still we are underpaid,” he said, adding that “salaries of 52 employees have been halted for unknown reasons.”

The employees while protesting at Rambagh office said that we have halted all the work of the Information division Kashmir until the order is revoked and our salaries be released. As such there will be no advertising services also.

The employees have appealed to the Lt Governor Manoj Sinha and Commissioner Secretary Information to look into the matter and ensure order be revoked and salaries be released at an earliest. (KDC)

Previous article7 militants killed, one arrested in last 7 days: Army
Next articleWatch | Every party united in J-K on restoration of Article 370, 35-A: Farooq Abdullah