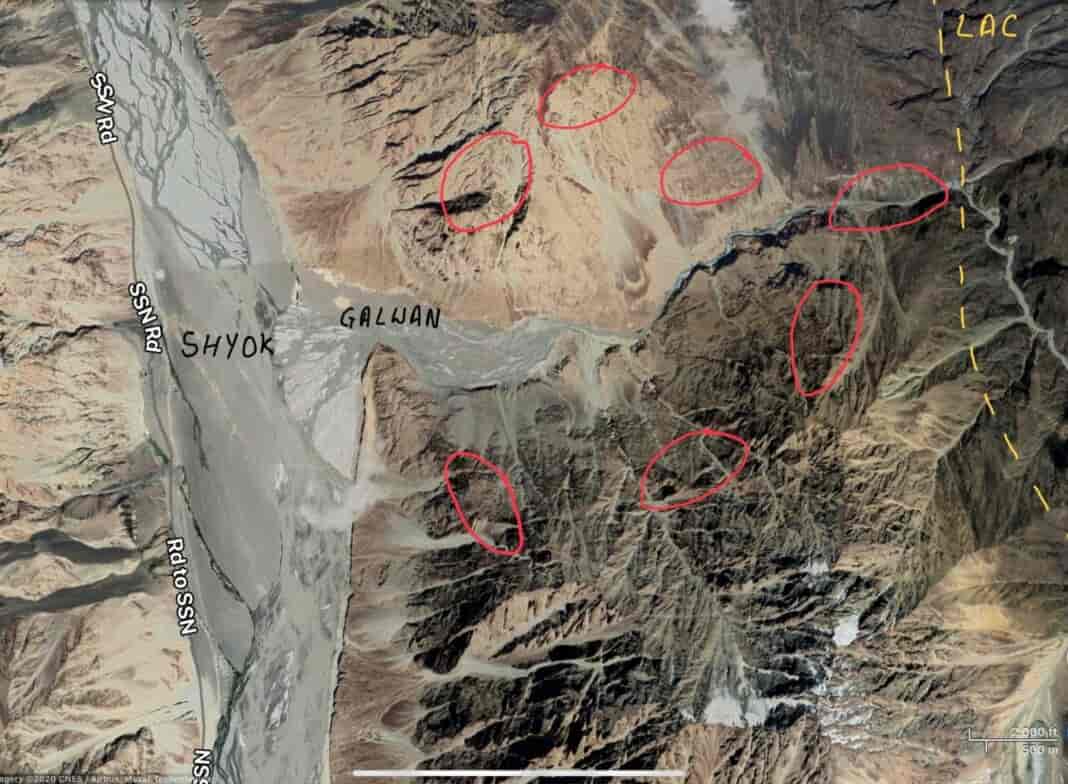 The present standoff between India and China has once again brought to light the strategic importance of Jammu and Kashmir in the matrix of South Asian politics. The bifurcation of the erstwhile state on 5 August 2019 has further complicated the already troubled nature of not only the region’s internal but external dimensions as well.

The turbulence in this region was felt with the partition of the subcontinent and has culminated in the unilateral bifurcation of the region and its status of exclusion from the federal scheme under which the accession to India took place. While the current context is international, it is imperative to view the region in terms of the nature of the contestation that goes back in history.

The maps in this post give a fair view of the geography and boundaries that are now often referred to in debates on media platforms. The place names and terms that are being used have to be defined first. The mountainous 37,555 square miles region known as Aksai Chin is strategically important for China which administers it as it connects the Chinese Xinjiang (Sinkiang) province with Tibet Autonomous Region (TAR).

The region is close to the Pamirs, known to Persian geographers as Bam-i- Dunya—the roof of the world. The mountainous Pamir region is spread over China, Tajikistan, Kyrgyzstan, and Afghanistan, touching the boundaries of Jammu and Kashmir that existed before 1947.

Historically the region has been very contentious between the local populations and the countries resulting in changes in their political boundaries. These states were occupied by Russian and later Soviet troops but achieved independence after the breakup of the USSR leaving China with multiple neighbors.

China has succeeded in fixing its boundaries with all these countries in a unique mix of diplomacy and statesmanship. It has come to an agreement over the border with Pakistan in Aksai Chin as per the Macartney-McDonald Line. The Shaksgam Valley as per this line was given over to China by Pakistan, which thereafter gave up its claim on these regions.

Though this line – drawn by Macartney Macdonald, the British Ambassador to Afghanistan and therefore the name – was not part of any final agreement, it was a basis on which negotiations were conducted between China and Pakistan. The detailed agreement also gave some territory to Pakistan that was under the occupation of China.

As this boundary was part of the territory of J-K under the administrative control of Pakistan, the border agreement of 1963 between them clearly states that the agreement is subject to the final settlement of the dispute over Jammu and Kashmir. So in the interim, there are no longer any border issues between the two countries now.

The Galwan valley has now become a theatre of strategic importance and contest between India and China as the latter has crossed the Line of Actual Control (LAC) into the valley at different locations shown on the map.

This valley was named after a KashmirBashi, RasulGalwan, the caravan leader when the expedition of Earl of Denmore lost its way and strayed into the desolate wilderness on return from Central Asia. Mr. Galwan due to his immense strength and knowledge of the harsh terrain guided the expedition successfully to safety through this valley. This is the contentious part of the larger Central Asian region pertinent to Jammu and Kashmir that has historic linkages of trade commerce and culture with the erstwhile State especially, Kashmir and Ladakh.

Looking at the routes and linkages that Kashmir and Punjab hill traders had with Central Asia, we find that the first landing post has been Yarkand, a distance of 777 miles from Srinagar. The journey really takes off from Leh. It is because of Central Asian trade that Leh, the capital of Ladakh was described by the British Joint Commissioner, Ladakh, R. L. Kennion, in 1910 as: “what Port Said is to Suez Canal, Leh is to the Central Asian Trade Road”.

From Leh to Yarkand there are three routes open to the traveler to choose. The first is the Zamistanee, Persian,( winter route) which from Leh crosses the Digger La Pass, and ascends the valley of the Shayok River to near the Karakoram Range. This route was used only in winter as the rivers and ravines would be frozen making, therefore, these becoming traversable. In summer due to glacial melt, the rivers swell and it is impossible to cross the river. It is this track that has now been provided with an all-weather blacktopped road by the Indian Army and that is where main incursions from China are taking place at a location or area called Galwan Valley.

The second route, the Tabistanee, Persian (brighter road), or summer route from Leh, crosses the Khardong Pass, 17,574 feet above the sea, and the Shyok River at Suttee; from whence, ascending the Nubra Valley, it crosses Karowal Pass, and then the difficult Pass of Sasser, 17,972 feet above the sea, joining the former route at Moorghoo. The distance from Leh to Yarkand by the Zamistanee route is 430 miles, by the Tabistanee some 480 miles. The distance up to the Chinese border after the Indian last sector Doulat Beg Auldi, also spelled as Oldie (DBO)—literally the grave of a rich merchant or warrior—Shadula is distant from Leh by 191 miles and from then on to Yarkand is another 316 miles. This was the only motorable route for civil and military towards Nubra and beyond after which the mountain accented, Siachen and DBO. The new DBO road along the Shyok river valley via Galwan has now led to the present crisis.

Leh, Ladakh has been the landing and arrival port of call for the whole of the Central Asian trade and travel. Leh during the busy and expanded trade in mid19th and early 20th Century became so prominent in the whole scheme of things that Mr. Kennion, a European visitor referred to it as:

“Leh, the capital of Ladakh and the first major town descending from Tibetan plateau and Korakarum mountain range, has been variously described as ‘true little capital, the seat of the tiny cosmopolitan world’ and ‘what Port Said is to Suez Canal, Leh is to the Central Asian Trade Road”

Srinagar in Kashmir has had a deep and profound relationship with Yarkand. During the 19th and early 20th centuries, these were kind of sister cities with a robust Kashmiri population comprising mostly traders in Yarkand. These merchants had also formed a highly respected guild that attended to trade and social issues in Yarkand.

Likewise, Srinagar hosted a community of Yarkandi traders followed by their craftspersons. Due to political upheavals and incessant disputes, Yarkandis and other ethnicities from Sinkiang were forced to migrate twice in the 20th century. A large number of them also came to Kashmir mainly due to the presence of members of their ethnicity. The first migration took place in 1933 during the Dogra rule. Though initially unwelcome, eventually found some space in Srinagar owing to the taxes and duties the Yarkandis paid to the Dogra rulers.

The second migration took place due to the occupation of Sinkiang province by the People’s Republic of China in 1949. The migrants were led by an eminent and popular Uighur politician Isa Aspteken. This migration received international attention so much so American Secretary of State came to Srinagar to meet them. They were subsequently offered citizenship by Turkey and were flown to Istanbul under the aegis of the United Nations.

A merchant and a respected member of a family of renowned mystics, Ahmad Shah Naqshbandi traveled from Srinagar to Yarkand in 1846 AD and left a Persian memoir of his journey. He was son of Revered Shahniyaz Naqshbandi, a Sufi and a scholar whose disciples and followers were spread in all of central Asia and Kashmir.

This memoir was later translated into English by the Royal Asiatic society. In this memoir, among other interesting details, he makes an elaborate mention of the status and treatment of Muslims by the Imperial Chinese Government of the time:

“The government also appoints a Mussulman governor or magistrate, called Hakim, distinct from the Amban. The administration of justice in the city, the collection of the customs, tribute, and government grain, and the keeping of the registers, or accounts of the city, are the duties of the Amban. There is no interference of any kind with the religion of the Mahommedans. The Kazi of the city holds a very high station, and his orders are treated with the greatest respect. The Ulamas, or learned Mahomedans, are treated with much honor and regard. Whenever a dispute arises between a Mahomedan and a Chinese, it is settled according to the Mahomedan law. The Chinese also are sent to the Hakim, and he, with common consent, settles their disputes by Mahomedan law. The law is very rigidly administered, even to the nobles; so much so, that if a prince were to kill a poor man, the murderer would on no account be exempted from the punishment of death”.

This becomes relevant in the context of press reports of the harsh treatment of Uighur Muslims in present-day China. There is surely some truth in these reports as these are widely circulated by Uighur Congress, an organization of Uighur refugees settled in Europe.

The region is again on boil. We have not heard the last and surely it will remain a work in process till the region throws up an enlightened leadership when the regional aspirations are married with the geographies and there on to the borders. With newer regional connectivity through transnational road networks a viable economic opening is awaiting to be exploited by the countries and peoples of the region. It is hoped that this new economic opportunity coupled with respect to the aspirations of the peoples and countries might in the foreseeable future lead to peace and prosperity in the region.