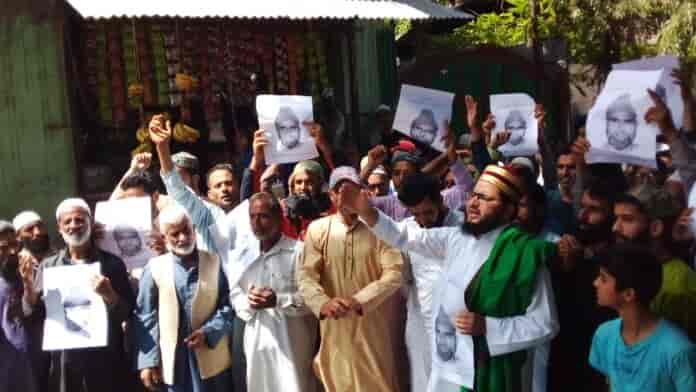 On his 27th death anniversary, the slain Mirwaiz of South Kashmir, Qazi Ahmed Nisar was remembered by his followers across Kashmir valley.

In his speech, Moulana Fayaz Ahmed paying glowing tributes to the Mirwaiz said, “Dr. Qazi Nisar could have chosen an easy luxurious life, however, he chose a life full of hardship for his people. It was only because of Dr. Qazi Nisar that Islamic education which was a luxury of a few was dispensated to people irrespective of castes and classes.”

His vision on education and societal development was unparellel, Moulana Fayaz said while addressing a large gathering.

He said that his vision to open schools in far-flung areas of Kashmir was nothing but to dispense education in the area where education was not available easily, where people had to travel long distances for reaching schools. “The purity of his intentions is reflected in the fact that none of the schools, he opened is in the name of his any relative or family members.”

In Pulwama, Moulana Showkat Nizami held a rally inside the mosque compound while remembering the slain cleric, he said, “His vision of uniting Muslims under a single banner is unparalleled. In 1986, his role for the unity of Muslim Ummah is still something Kashmir needs utterly. He was the pioneer of Muslim United Front, which later shaped the base of Kashmir’s armed struggle.” Read the communique.

In Shopian, several clerics including, Moulana Mansoor Hashmi and Moulana Shanawaz Gazali also paid tributes to the slain leader. “He was a leader of masses, his contributions to the literary, social and political front are commendable. He never bowed down to the power of politics or the power of money and materialism. Qazi Nisar was a leader whose support mainly came from the rural areas. His vision about Kashmir and its progress is unmatched. He spoke on the subjects people still fear to take up. He left his job to reach more people through Mosques,” Moulana Shanawaz said.

The spokesperson of Ummat e Islami also paid tributes to the Mufti and Mirwaiz of south Kashmir. “Many years earlier, Qazi Nisar launched a struggle to hand over the Waqf board to the Kashmir locals, so that people could use the money to build schools and hospitals. Today the Waqf Board has been centralized and the money would go to the Prime Minister’s fund. Qazi Nisar wanted the money to be used for Kashmiris.”

He said that Qazi Nisar’s life passed away in the service of his people. “His assassination left a void among thousands of his followers which remains unbridged. People disassociated from causes and missions. His killing was a huge loss to the people of Kashmir.”

Remembering one of his speeches, the spokesperson said, “Qazi Nisar wanted to open medical and an engineering college in Kashmir, however fate did not support him and we lost a visionary leader to the long conflict in Kashmir on 19 June 1994.”