In Bandipora, 48-yr-old woman on shoulders to hospital in absence of road 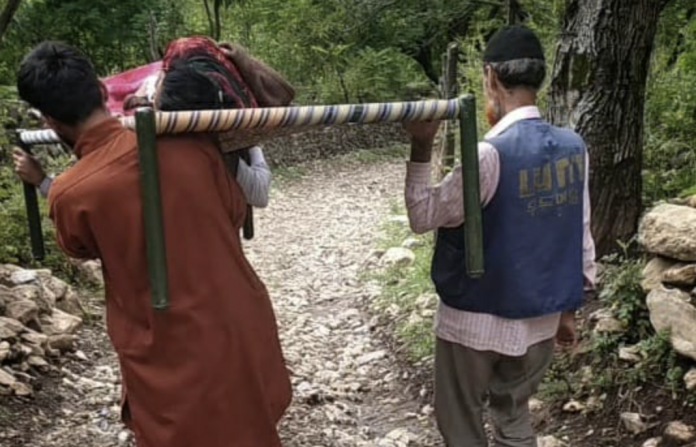 Bandipora: In a small village of Kunan in North Kashmir’s Bandipora district, people carried a 48-year-old female patient on their shoulders for about a kilometer due to lack of road connectivity.

Hapatnar-Babagund a small hamlet is located about one kilometer from Kunan village of the district where as per official record, 23 families live- all below the poverty line (BPL).

Locals told news agency—Kashmir News Observer (KNO) that a female diabetic patient, Shama-Parveen was suffering from pain in her right hand due to infection, but the village does not have about a kilometer of road.

“So we had to carry her on our shoulders to Kunan. From there we drove the patient to the district hospital Bandipora,” they said.

Junaid Qureshi, the patient’s son, said that there is still no proper road in his village which highlights the lack of basic facilities, even in an emergency situation, in the village.

“When we reached the district hospital, doctors told me that I was lucky to arrive early, and immediately my mother was shifted to Srinagar for advanced treatment,” he said.

Meanwhile, locals appealed to district administration Bandipora to pay due attention to their area so that their sufferings and miseries will come to an end.

In a video that has also gone viral on social media, three persons can be seen ferrying a patient on their shoulders and are walking on a path full of small rocks to reach the Kunan main road.

Meanwhile, an official from the district administration when contacted said that he will look into the matter. An official, however, said that the hamlet is already connected with the nearest Bandipora-Arin motorable road, and the same will be repaired very soon if required—(KNO)