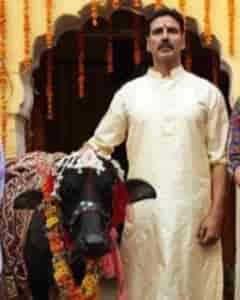 Bollywood superstar Akshay Kumar has revealed that he drinks cow urine every day for ayurvedic reasons.

The actor also known as Khiladi Kumar is currently shooting in Scotland for his upcoming film BellBottom with Huma Qureshi and Lara Dutta Bhupathi, joined British adventurer and host Bear Grylls for an Instagram Live, to talk about going on a jungle adventure with him.

When Mrs. Huma asked Mr. Akshay how he convinced himself to drink elephant poop tea on the show, Akshay said: “I wasn’t worried. I was too excited to be worried. I have cow urine because of ayurvedic reasons every day, so that was okay.”
Mr. Akshay is known for his nationalism and adoring of Prime Minister Narendra Modi.