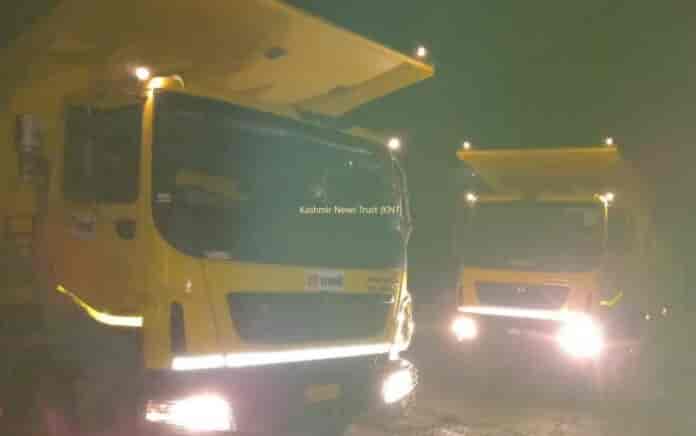 Men allegedly employed by Hyderabad based infrastructure firm ‘Megha Engineering Infrastructure’ which is the executive agency for the construction of Zojila Tunnel were caught by a team of Irrigation and Flood Control Department when they were busy in extracting sand and boulders from Nallah Sindh near Nilgrath area of Sonmarg here in Central Kashmir’s Ganderbal district.

Pertinently, despite a blanket ban imposed by the Jammu Kashmir High Court to keep a check on the unabated extraction of minerals from local rivers, Nallah Sindh, one of the main source of fresh water and favourable for the trout fish habitat, has been worst hit with illegal extraction of sand and gravel going on unabated.

An official from Irrigation and Flood Control Department told news agency Kashmir News Trust that they had been receiving information that some people employed by ‘Megha Engineering Infrastructure’ firm are extracting sand and bajri from Nallah Sindh during night hours.

“We constituted a team that raided the spot near Kokri Kadal Nilgrath. The team arrested four persons on spot and seized the four Dumpers and one L&T Construction and Mining Machine that were used to ferry illegal sand and boulders from Nallah Sindh to designated place,” the official said.

He said that all the 4 accused were handed over to police and presently they are lodged at police station Sonmarg. “We have asked police to register a case under relevant sections against the accused. The four Dumpers and L&T Machine have also been handed over to the police,” the official said adding that the raid was conducted in the middle of the night.

The official said they are going to raise the issue with the firm involved in the illegal practice.

When contacted a top police official confirmed that four persons have been arrested and four dumpers and one L&T machine of ‘Megha Engineering Infrastructure’ has been seized. “An FIR vide number 4/2021 under section 188, 379 has been registered in this regard,” the police official told KNT.

A militant has been killed in an ongoing encounter that broke out between the government forces and militants at...
Kashmir