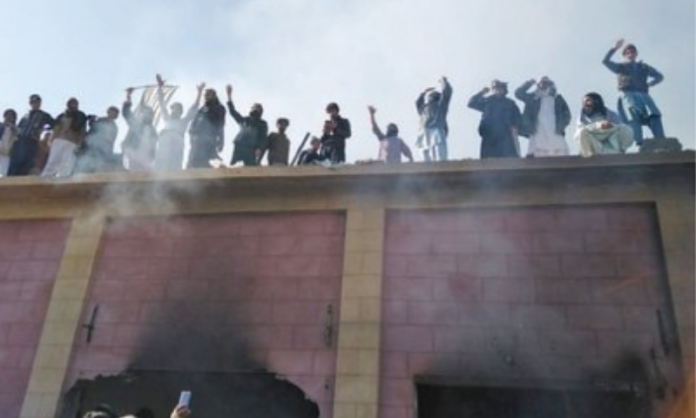 Fourteen people were arrested in overnight raids after a Hindu shrine was set on fire and severely damaged by a mob led by supporters of a cleric in Khyber Pakhtunkhwa’s Karak district, Dawn newspaper quoting unnamed officials reported.

The temple’s destruction on Wednesday drew condemnation from human rights activists and the minority Hindu community.

Local police said they detained at least 14 people in overnight raids and more raids were underway to arrest individuals who participated or provoked the mob to demolish the shrine.

The attack happened after members of the Hindu community received permission from local authorities to renovate the building. According to witnesses, the mob was led by a local cleric and supporters of a religious political party.

Minister for Religious Affairs Noorul Haq Qadri called the attack “a conspiracy against sectarian harmony”. He took to Twitter on Thursday, saying attacks on places of worship of minority religious groups are not allowed in Islam and “protection of religious freedom of minorities is our religious, constitutional, moral and national responsibility.”

The incident comes weeks after the government allowed Hindu citizens to build a new temple in Islamabad on the recommendation of a council of clerics.

Although Muslims and Hindus generally live peacefully together in Pakistan, there have been other attacks on Hindu places of worship in recent years.District Police Officer Irfanullah told Dawn that a first information report (FIR) was registered against two local clerics identified as Maulvi Mohammad Sharif and Maulana Faizullah and several other unidentified persons.

He said that the protesters were peaceful in the initial stage but on the provocation of some clerics, they turned violent and attacked the shrine.

However, the local clerics claimed that the Hindu community had given a contract for the expansion of the shrine to a local contractor which was not acceptable to the people. The speakers in the meeting claimed that they were ready to accept the verdict of the Supreme Court of the country wholeheartedly.

The local people claimed that the Hindu community provided funds for the expansion of the shrine which was in violation of the court’s judgment.