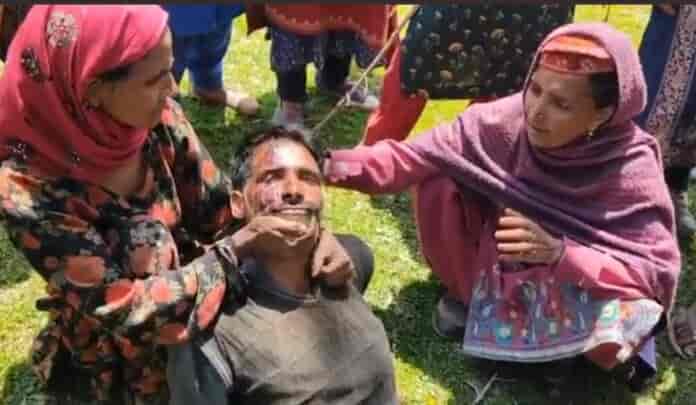 At least 18 persons including five journalists were wounded on Monday after the forest eviction drive launched by the Forest department turned violent in the upper reaches of Zampathri area of south Kashmir’s Shopian district.

The eviction drive started by the forest department in the upper reaches of Zampathri area turned violent after the Gujjar community resisted the drive.

A video of a brutally beaten-up Gujjar man was also viral on social media after the violence. People from Gujjar community said that they aren’t the permanent residents of the area, saying they have been erecting temporary sheds here for living to graze the cattle.“However, without serving any notice, the forest department officials reached the spot and started an eviction drive.  We have insisted to the officials that we leave the area every year and there was no need to evict us,” they said.

The officials started beating them with whatever came in their way and injured three among them including two women, they alleged, saying that instead of extending a helping hand to the people amid the pandemic, the government is pushing them to the wall.

They urged the government higher-ups to look into the matter.However, forest officials said that once the eviction drive was started, the people from the whole Gujjar community assembled and made officials as well as journalists hostage in a fenced area of PHE and were not allowing us to come out.

District Forest Officer (DFO), Mohammad Ayoub told KNO that the people from the Gujjar community attacked them during a routine eviction drive.He said that the community was already asked to prove their claim if land belonged to them, however, they failed and accordingly the drive was started.

Ayoub said that besides officials, the journalists who had come to cover the drive, were taken hostage and were rescued by the timely action of the police.He said that they have sought an FIR against the community in this regard—(KNO)