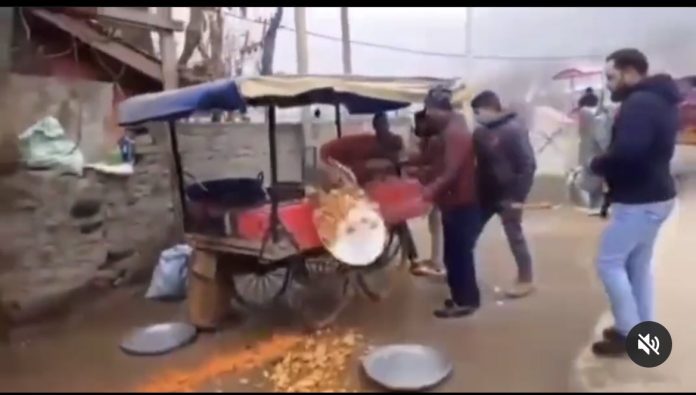 Baramulla: A day after social media was flooded by the criticism over alleged vandalisation of goods of street vendors by Municipal officials in northern district of Baramulla, J-K government Tuesday suspended four employees and directed the Executive Officer of the district to recover the losses from staff involved in the act.

Videos showing an official throwing away goods of street vendors in Baramulla went viral on social media platforms on Monday evoking wide-spread criticism from netizens who “called names of the official involved in the act terming him Hitler.”

Acting swiftly the Directorate of Urban Local Bodies Kashmir Tuesday directed Executive Officer Baramulla to place those involved under suspension and recover the losses suffered by vendors from them.

In order, a copy of which lies with news agency—Kashmir News Observer (KNO) reads that a video clip was circulated on the social media, wherein the employees of Municipal council Baramulla were seen destroying the articles/ items being sold by the street vendors on their vending carts.

“You are, therefore, directed to recover the losses suffered by these vendors from the concerned erring staff involved in such inhuman act and compensate the vendors accordingly,” the order further read.

It also read that besides, all the concerned staff involved in the brutal action shall immediately be placed under suspension and relieved to this Directorate by today, and a detailed report in the matter be furnished to the Directorate.

Taking cognizance of the same, the Executive Officer Municipal Council Baramulla placed four employees under suspension with immediate effect and attached them to the office of the Directorate of Urban Local Bodies.