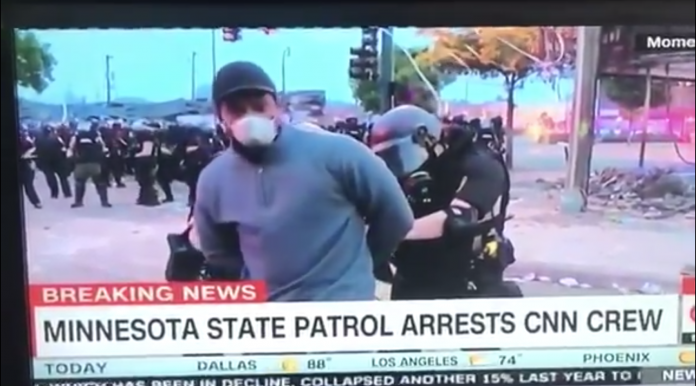 A journalist and his crew have been arrested during a live broadcast from the Minneapolis protests over the killing of black man.

CNN correspondent Omar Jimenez and his camera crew have been arrested during a live broadcast from the Minneapolis protests.

Footage quickly emerged online, which you can see below, and many of Jimenez’s colleagues took to twitter in outcry.

The incident took place shortly after 6AM ET during the live filming of CNN’s weekday morning show New Day.

In the footage, Jimenez, sporting a virus protective mask, is being quizzed by his anchors Alisyn Camerota and John Berman in front of a group of riot police as they move to arrest a nearby person. State patrol then approach the presenter and his crew, and Jimenez can be heard telling the officers that the four-strong unit can move “to where they would like” and get out of their way in a cooperative and non-confrontational manner. The officers surround the crew as Jimenez continues to report live on air, before he is told that he is under arrest and placed in handcuffs, displaying them to the camera as he is walked away. After a moment, the crew are also placed into handcuffs.

Protests have swept the United States over the death of George Floyd, an unarmed Black man

According to Al-Jazeera the protests intensified after  some demonstrators gaining access to a police precinct in Minneapolis, Minnesota, and setting sections of the building on fire.

Floyd died on Monday after a white Minneapolis police officer used his knee to pin Floyd’s neck to the ground for several minutes.

The four officers involved were swiftly fired, but Floyd’s family, community leaders and residents are calling for arrests to be made.