From rice fields to mountains: Behind Kashmir’s vaccination drive and hesitancy 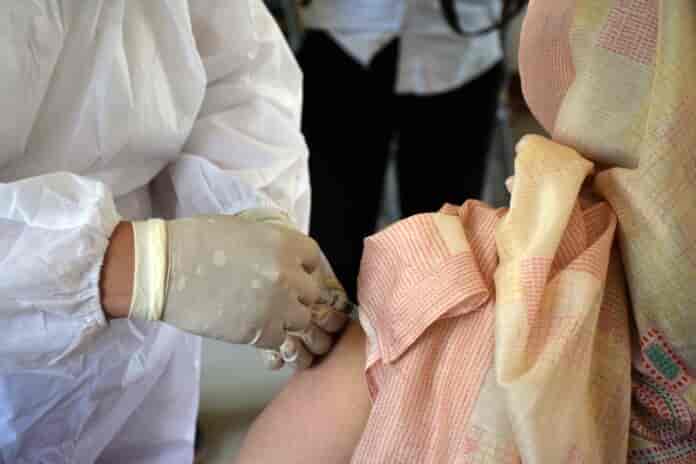 Tabasum Ara was often agitated in the past year as she went door to door, into the rice fields, or across the mountainous terrain to vaccinate the people – many of whom are reluctant.

“I tell myself that I have been chosen for this important process. So I can even tolerate slurs while performing duty,” said Ara, 28, a Female Multipurpose Health Worker (FMPHW) from Payer village of south Kashmir’s Pulwama district.

Ara had been vaccinating newborns and toddlers since 2010, however, this year, she faced a novel challenge to vaccinate people against the Covid-19 — a pandemic that ravaged several countries. 318693 people have been infected and 4357 have died so far in Jammu and Kashmir.

The vaccination process started on 16 January 2021 in the region and so far more than eight lac people have received both the shots of Covid-19 vaccines.

After vaccinating frontline workers, from 1 March this year, Ara along with her team were directed to go door-to-door for conducting the vaccination process of senior citizens. “We realised that people were scared of getting vaccinated and there was also a lockdown. So the process was not feasible for them,” she said.

The hesitancy against the Covid-19 vaccine has been rampant with the government coming up with initiatives to tackle the dissemination of disinformation and create awareness.

A message by Luc Montagnier, a French Nobel laureate, was widely circulated on social media platforms, in which he claimed that anyone taking the vaccines would die within the next two years. Moreover, other rumours regarding the vaccines causing infertility among men and women, mental health issues and irregular menstruation in women, said Ara, led to a huge wave of vaccine hesitancy amongst people.

“We used to keep the people under observation for one and half hours at the sub centre after vaccination,” she said. “Everything would remain fine.”

Ara has been trying to debunk the myths revolving around the infertility caused in women by giving them the examples of her fellow healthcare workers who have received the vaccination shots and conceived afterwards. “One of our fellow doctors at the hospital got vaccinated seven months back,” she said she would tell people. “Today, she is pregnant.”

Throughout these months, Ara has been trying to tell people the importance of getting vaccinated. But there is a limit, she said. “We told them [people] that the vaccine is just an immunobooster,” she said.

Moreover, Ara said that healthcare workers have not only gotten themselves vaccinated but also their families as well. “This is how we try to gain their trust,” she said.

The process of vaccinating people takes a lot of patience and would often take around thirty minutes to convince each person to get vaccinated, said Ara. “We often make the target of vaccinating 100 people per day but convincing people takes most of our time. Sometimes people try to push us out of their houses,” she added. “We start early in the morning around 8 and finish around 10 at night.”

As compared to youth, convincing old people takes more effort due to the lack of awareness, said Ara. Recently when Ara went to an old lady’s house in Srinagar, Ara had to sit with her and tell her the importance of getting vaccinated for a long time before she agreed. “I told her that I had come all the way from Pulwama just to vaccinate her.”

Ara’s duty has impacted her personal life as she has spent most of her time away from her home, she said, but with the support from her family she keeps going. “I have not taken a single leave since the 16th January. My family tested positive in this process,” she told The Kashmir Walla. “I was always scared that I might infect them some day but when it actually happened they supported me even after that.”

Ara said she has inoculated more than 10,000 vaccines and has been awarded a certificate of appreciation by the department of health.

Mir Mushtaq, spokesperson of the Directorate of Health Services, Kashmir, told The Kashmir Walla that there was vaccine hesitancy among people at a large-scale but the department’s “very aggressive awareness campaign throughout the valley, and the government officials and doctors came forward themselves for the vaccination, the apprehensions among people got reduced”.

“There are still a lot of rumours on social media and people cannot be blamed for being scared. This is a new disease and we are still learning about it,” he said. In a survey conducted by National Health Mission (NHM) on 800 deaths, it was found that
93 percent of the people were those who had not gotten themselves vaccinated, 7 percent were those who had taken just one vaccine and zero percent were those who were fully vaccinated, said Mir. “Whatever data or research is with us suggests that vaccination is safe,” he added.

“People who are still unvaccinated should immediately get themselves vaccinated,” said Ara. “Death is not in our control but precaution is.”