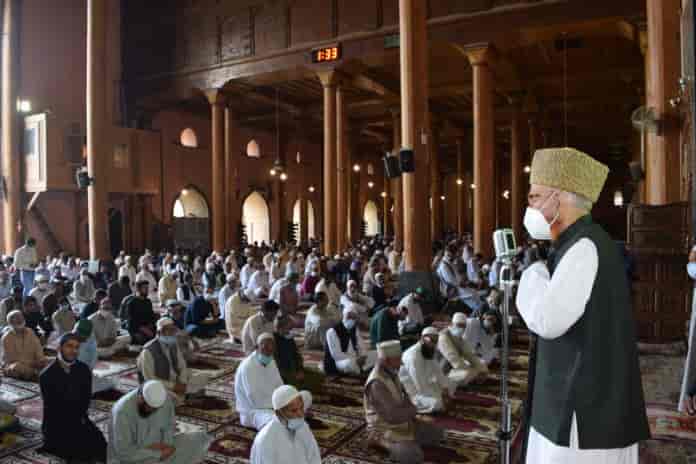 The congregational Friday prayer was offered at Srinagar’s historic Jamia Masjid after nearly four months as it had remained off-limits for prayers due to the second wave of COVID-19 pandemic. People at the mosque, however, said it didn’t feel the same as before in absence of Mirwaiz Umar Farooq, who remains in house detention.

The Jamia Masjid has remained shut for several lengthy spells during the last three years, first in the aftermath of 5 August 2019 and then subsequent COVID19 restrictions.

The Auqaf, however, criticised the government’s decision of continuing incarceration of Mirwaiz Umar, who is the chief cleric and also chairman of Hurriyat Conference.

“Since the past two years Mirwaiz e Kashmir has been arbitrarily detained at his house by the state authorities, and is not even allowed to visit Jama Masjid to deliver the Friday sermon – which people are longing to hear and participate in,” the statement said.

Imam Hai Moulana Syed Ahmed Naqshband, in his address, also lamented that for the past two years Mirwaiz has been “arbitrarily detained at his house by the state authorities, and is not even allowed to visit Jama Masjid to deliver the Friday sermon.”

“This is causing people great hurt and anguish,” he said. “It is the centuries old tradition of Mirwaizeen-e-Kashmir who delivers the unique Friday sermon from the pulpit of the Jama Masjid.”

He added that by keeping the pulpit forcibly empty by detaining Mirwaiz, “authorities are deliberately hurting the sentiments of Kashmiri muslims.”